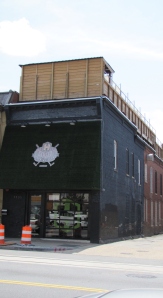 H street Country Club Wants to Extend Roof Deck Hours To 2:30 AM on Friday and Saturday

Would XII’s Sky Bar – Already the Focus of Noise Complaints – Be Far Behind? 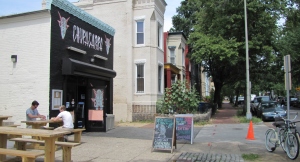 Englert, who owns food and drink establishments across the city and who was one of the early founders of restaurants on H Street, is asking the ANC to allow him to operate roof decks at H Street Country Club, 1335 H Street, NE; Vendetta, 1220  H Street, NE; and the Rock & Roll Hotel, 1353 H Street, NE, until 12 am on Thursday and 2:30am on Friday and Saturday.

Englert’s requests were supported by other H Street restaurateurs including Phil Peters of Smith Commons at 1245 H Street, NE, and Sarosh Hussain of Cusbah at 12th and H.  Cusbah, is currently the only restaurant on H Street operating on its patio/sidewalk café until 3 am – allowed by a previous license agreement which is now up for renewal.  The ANC is protesting renewal of Cusbah’s liquor license to bring Cusbah into line with its policy governing other H Street patios.

Englert’s justification for his request to extend operating hours for his rooftop decks is that “other establishments operate later” – both on H Street and elsewhere in the city – and earlier hours for H Street is not only “unfair,” but puts his places at a competitive disadvantage.

Jason Martin, owner of Sticky Rice, Dangerously Delicious Pies, as well as a piece of the Rock & Roll Hotel, is requesting a new tavern license for his Tacqueria Chupacabra at 822 H Street, NE (which actually is well down the north side of 9th Street adjacent to a residential area).  The taco place which seats six inside, wants to serve beer and frozen margaritas both at the six stools inside and at the picnic tables seating to up to 60 patrons in the large public space outside the restaurant.  His request is being supported by the other restaurateurs.  The former taco food truck operation which morphed into the brick and mortar carryout sells food so cheaply – according to Martin ($3 tacos) – that its survival without a liquor license is questionable.  And, he claims, since it would be hard for him to meet the 40% of revenue from food sales required by a restaurant license, he wants a tavern permit which has no percentage requirement.

In general, the restaurateurs made the case that they must have greater flexibility to compete or survive, and if the ANC doesn’t work with them to prevent the situation from getting “out of control like Adams Morgan and U Street,” and if the ANC continues to “nitpick everything” the city’s desire for development and revenue will provide a win for the business operators in the end.  They warn that with the coming of the trolley cars and new venues like Ben’s Chili Bowl – scheduled to open early next year at 10th and H Streets, NE, the businesses, community, and ANC need to work together to address potential problems now or face a bigger issue a few years from now.

Commissioner Williams’ response was that the ANC has a standard Settlement Agreement on its website, and business operators know what they are getting into when they open up on H Street, saying that uniformity of standards provides for predictability.  He noted that it is generally the policy of the ANC to discourage tavern licenses in favor of the more restrictive restaurant licenses to reassure neighbors and to insure that some food is being served.

Residents who attended expressed concerns about the impact of granting greater operating flexibility to the business owners.  Chupacabra adjoins residences and has little support from those residents for late night drinking in public space according to one representative of those neighbors.  Another neighbor representative expressed concern about noise issues associated with operating late night rooftop decks and with patrons filtering through the neighborhoods in the early morning hours.

In the end, the ANC Committee voted to recommend a restaurant liquor license for Chupacabra, William’s announced that the discussion of the request for expanded hours for rooftop decks would carry over to the September when a broader conversation with more participants can occur. The owner of Cusbah stated that he was willing to compromise on his request for late hour operation of his patio and would seek a further meeting with Commissioners.  Separately, the Committee voted to protest a request from Sarah at 1200 H Street to add an entertainment endorsement/dancing and cover charge to its license.  These recommendations will go to the full ANC at its September 12 meeting at 7 pm at the Sherwood Recreation Center, 10th and G.