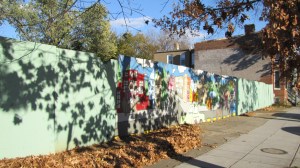 Mural-ed Fence Behind which Frager’s New Structure Will Rise 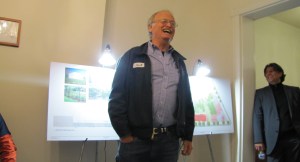 Frager’s Hardware plans to erect a 5800 square foot temporary structure in the vacant lot surrounding 1230 Pennsylvania Avenue, SE.  The lot and the town house at that location are owned by Larry Quillian.  Capitol Hill residents have become accustomed to the long fence featuring colorful murals just east of the CVS at 12th and Pennsylvania Avenue.

The new structure will be two and a half times the size of the Frager’s location at 1323 E Street, SE, and much of that hardware stock will be moved to the Pennsylvania Avenue location.  The nursery stock and garden supply will be moved there as well in the event construction on the Hine project forces Frager’s to move from the location opposite Eastern Market.  In an earlier interview, Frager’s owner John Weintraub said that Frager’s might have to move from the Eastern Market location within 12 weeks of the resolution of the current appeal of the Zoning Commission’s approval of the Hine project, now before the DC Court of Appeals.

Applications for the necessary permits for the new structure will begin next month, and depending on how quickly that process can be completed, construction will take a few weeks and the new location could be open for business as early as next spring – March is the target.

Thursday night, Weintraub told a meeting of nearby neighbors called to brief them on Frager’s plans that, “We’re just trying to keep Frager’s going and this is one piece of the puzzle.  He said the uncertainty regarding the Eastern Market location and the short term lease on the E Street location plus the fact that there is not enough space there were the reasons driving the decision to put up the temporary structure.  E Street will remain in operation after the new location opens and the paint store will remain at 1129 Pennsylvania Avenue, SE.

Regarding the main site which was destroyed by fire earlier this year, Weintraub said Frager’s is working with the Historic Preservation Office (HPO) to move forward to rebuild.  Frager’s has applied for a demolition permit, but HPO wants to save the façade on Pennsylvania Avenue and on 11th Street.  Weintraub has a team working on the permit process to shore up the façade which is necessary before debris and hazardous materials resulting from the fire can be removed.  He said, “It will be a couple of years before we can reopen.”