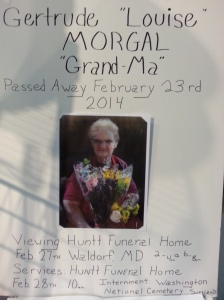 Ms. Gertrude “Louise” Morgal “Grand-Ma”, a long-time Eastern Market produce seller, passed away on February 23, 2014, at the age of 89.  According to Barry Margeson, Eastern Market Manager, Ms. Morgal began selling at Eastern Market after the K Street Market (at 5th and K Streets, NW) closed in 1963.  She and her husband, Elmer moved their business to the Florida Avenue Market.  Business wasn’t as strong as they’d hoped and after a few weeks they moved to the south end of the farmer’s line at Eastern Market.  Angie’s Flower Stand, adjacent to Market Lunch inside the South Hall is maintaining a book for expressions of sympathy or remembrance.