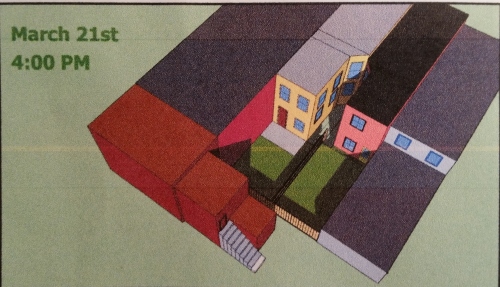 11th Street residents’ study showing how 1015 E after the proposed extension (in red) would affect their sunlight and egress at 4:00pm on March 21

11th Street residents’ study showing effect of the extension on sunlight at 6:00pm on March 21

ANC6B Had Voted to Take “No Position”

A dispute between the developer of a five unit apartment building at 1015 E Street, SE, and owners of adjacent properties on the 500 block of 11th Street has been resolved, after the intervention of the Board of Zoning Adjustment (BZA).  At a hearing on the case on May 5, the Board was on the verge of denying the developer’s request for a zoning adjustment to allow the construction of an addition which would result in a in a 24 foot high wall across the back of two residences on 11th Street which sit at right angles to the new construction.  See CHC posting here:  http://bit.ly/1DJYRQF  At the last moment, the BZA pulled back the denial to allow the parties a chance to work it out.

The parties did reach an agreement, and Tuesday night, ANC6B signed off on the compromise that would move the addition to the rear of the property at 1015 E Street where it would have lesser impact on the two 11th Street properties.  The proposal was similar to one which had been floated earlier by the developer in order to gain the acceptance of the 11th Street residents, but the latter, steadfast in their opposition to the development, declined to meet with the developer.

The 11th Street residents’​ case against the development was based on their claim​ that​ the 24 foot wall at the rear of their properties would block air and light and deny the rear egress that now exists, although that​ exit​ would​ be located on​ the developer’s  property.

When the developer sought the support of ANC6B for the project at the regular ANC6B meeting on April 20, the developer’s real estate attorney, Cary Kadlecek, of Goulston & Storrs, told ANC6B “The concerns of the neighbors are legitimate, but not germane to law code and the only matter before the ANC was the zoning adjustment on the site’s western side.  He added, “ [Our shadow] studies show there will be no impact [on the 11th Street neighbors],”

Asked by Commissioner Jayaraman, “If you lived in this [11th Street] house and your views went from [before the construction of the wall] to [after the construction], are you okay with that?”  Athey replied, “Yes,” a response that drew snickers from the audience.

Jayaraman went on, “The applicant’s attorney said we can’t consider what’s on the [11th Street] side.  Sure we can, we have to, that is what we’re elected to do; it’s our job.  To say it is not germane, you can say that, but we were elected to represent citizens of our community and take a stand where something does not make sense and this project does not make sense.”

​The question that came before the full ANC committee was ​whether to endorse​ the ANC’s Planning and Zoning Committee​’s​ vote to oppose the variance.  Commissioner Brian Flahaven moved to strike the motion to oppose and substitute a motion to support the variance, based on a strict interpretation of what was before the commission – the question of the variance.  Flahaven added that the question had nothing to do with the wall behind the 11th street properties.  The motion failed, 3 – 5 – 2, with Flahaven, Loots, Burger in favor and  Hoskins, Krepp, Hagedorn, Samolyk, Jayaraman opposed.  Chao and Oldenburg abstained.

Chair Oldenburg moved the Commission “take no position due to the impact of the two story wall.” That motion failed for a lack of second.

Commissioner Loots said, “I have great respect for neighbors and impact on property…We as a commission need to be very careful in recognizing our statutory charge.  We are asked to opine on [the variance affecting the west side of the property], not height, mass, light issues…I cannot in good conscience oppose this project on the basis of damage [the variance] is going to do upon the neighbors… I don’t think we have the authority to justifiably oppose it.”  Chair Oldenburg said she agreed and asked Loots if he was prepared to offer a motion.  Loots said, “No.”

Oldenburg said that the motion she made earlier reflected that the ANC could support the variance would take no position due to the impact of the two story wall, and again offered the motion.  Flahaven, who rewrote the bylaws last year, pointed out that the motion (which had previously failed) had to be made by someone else.

Loots then moved that the “Commission take no position, and end it at that.”

The matter came before the BZA in a hearing on May 5th.  After presentation of shadow studies on how the building would affect the 11th Street residents, Kadlecek, reiterated the argument that the only matter before the BZA was the variance and that the impact of the construction on the 11th Street neighbors was of no concern to the Board.

BZA Chair Jordan replied, “I don’t find credible the shadow study presented by the applicant.  I find credible the shadow study provided by the [11th Street residents] in regards to this…even though we’ve been …  hammered by the appellant, that we just need to look on the west side of the building, because that’s where the (variance) is, the ultimate fact is that… it has effect upon all the property.”

BZA member and Chair of the Zoning Commission Anthony Hood, in agreeing with Jordan, saw things differently than the majority of ANC6B.  Hood stated, in response to Kadlecek’s claim the effect on the 11th Street neighbors wasn’t a zoning issue:​  “,,,zoning consists of protecting the safety and the health of the residents of the city.  So, I just want you to know, that’s part of zoning.”  He was speaking ​directly ​to Kadlecek, but ​the majority assembled for the ANC6B​ vote might have been the subject of his remarks as well​.

Chair Jordan moved to deny the developer’s request for a variance and Vice Chair Heath seconded the motion.  Just before the vote, Jordan offered the developer an opportunity to work out an agreement with the developer.  The developer accepted and asked for an extension of the case until June 16, which the Chair granted.  The vote to endorse that compromise came Tuesday night before ANC6B, which passed it 9-0.