ANC6B Executive Committee Meets at 7:00pm in Hill Center to set the agenda for the full ANC6B meeting scheduled for Tuesday, June 11.

Eastern Market Community Advisory Committee meets at 7:00pm in the North Hall of Eastern Market.  Look for updates on the construction plan for the Hine project and the marketing plan for Eastern Market and associated vendors.  Also on the agenda:  progress reports on the attempts to solve both the North Hall’s acoustic issues and the South Hall’s infrared lighting/food spoilage problems.

WAMU News is running a four part series on the relationship between DC developers, city officials, and campaign contributions.  Donatelli/Blue Skye are prominently featured in the first two stories, linked below.  Coincidentally, Donatelli/Blue Sky and city officials will meet with Hill East residents tonight to discuss the developer’s plans for the two prime parcels of land adjacent to the Stadium-Armory Metro stop on Reservation 13.  The ANC 6B Hill East Task Force is hosting tonight’s meeting from 6:30pm – 8:00pm at St. Coletta of Greater Washington, 1901 Independence Avenue, SE.

ANC6B Hill East Task Force meets at 6:30pm at St. Coletta to hear representatives of Donatelli/Blue Skye Development present their plans (again) for parcels F1 & G1 on Reservation 13.  Ketan Gada of the Office of Deputy Mayor for Planning and Economic Development will be in attendance to take questions from the community and Task Force regarding the process and timeline.

Comments Off on The Week Ahead….. 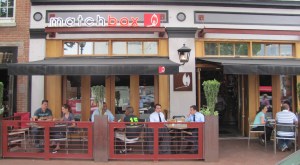 Fred Hermann of Matchbox told ANC6B on Tuesday night that since Matchbox doesn’t operate a loud patio and has otherwise operated responsibly, “there is no reason to adjust our hours.”  He said that the ability to operate their business as they saw fit was their right as business owners, and further, “We don’t want the ANC to dictate when we can do business.”

Hermann appeared before the Commission to support the renewal of the restaurant’s C-2 liquor license.  All other restaurant operators on Barracks Row whose licenses are up for renewal in the current round  have agreed to end their outdoor patio service at midnight Sunday – Thursday and 1:00am on Friday and Saturday.  Matchbox currently provides patio service until 2:00am Sunday – Thursday, and 3:00am Friday and Saturday.  ANC6B had asked Matchbox to sign a “settlement agreement” (formerly “voluntary agreement”) with the ANC, and swing into line with the other establishments.  The agreement would have permitted exceptions for special events on a case-by-case basis.  The settlement agreements come on behalf and in the interest of nearby neighbors who have had long-standing issues with noise on Barracks Row and on their streets as loud patrons walk to their cars in early morning hours.

Hermann’s thumbing his nose at the ANC was not well received.  Commissioner Garrison said he was “flabbergasted” at the “audacity of the move,” and urged commissioners to support a protest of the license to the ABC Commission.  Commissioner Oldenburg told Hermann, “I’m very disturbed by this.  The other restaurants on Barracks Row agreed to this; now one won’t do it.  I’m very disappointed.”  Commissioner Peisch, in whose single member district the restaurant lies, also express his unhappiness.

Commissioner Frishberg noted that in front of the ANC’s ABC Committee last week, Matchbox had only asked for flexibility for special events, and tonight has come back with something different.  None the less, he didn’t think the ANC had a solid case to justify a protest and he was concerned that the ABC Commission would ignore a protest that can’t be justified.  Commissioner Pate said he would support the motion to oppose – saying that the ANC may lose, but it is worth trying.

A motion to protest was agreed to 8 – 0 – 2.  A vote to protest signals the ANC’s concern and usually puts pressure on the applicant to sign a settlement agreement.

ANC6B’s concerns are several.  Matchbox playing by different rules than everyone else opens the door to future refusals from other restaurants who can claim a competitive disadvantage.  In addition, since the license stays with the location rather than the operator, a new owner who might not be able to make the same management claims as Matchbox could be difficult to rein in.  Most commissioners appeared to believe that Matchbox’s refusal sets a bad precedent that will only cause them future problems.

The Commission will consider two issues related to the Hine Development.  First up will be Stanton-Eastbanc’s public space application package.  It appears that the only significant change to the plan is elimination of the fountain which had been planned for the plaza and the addition of five trees.  Instead of a fountain, the plaza will feature nine water jets.

Second, the Commission will consider a recommendation from the Transportation Committee that the ANC support Stanton-Eastbanc’s plans for truck entrances and exits at Hine site during the demolition and excavation phases scheduled to start this July.

Liquor license renewals for the following restaurants were scheduled for discussion.

Liquor license renewals which the ANC’s ABC Committee placed on the consent calendar to expedite passage are as follows:

The Commission will discuss and vote on a recommendation from the Transportation Committee         Letter to DDOT in support of Navy Yard’s request for improved pedestrian crossings at 8th & M Streets SE.  The letter will likely request a meeting of stakeholders with DDOT to alleviate the serious pedestrian crossings and traffic backups connected with some 4,000 Navy employees’ cars which drive into the Navy Yard.

Comments Off on The Week Ahead……

As many as 10,000 dump truck trips carrying dirt and debris away from the Hine site will hit 7th Street, SE, between the middle of next November and the beginning of next April.  The period will constitute phase 2 (excavation phase) of the Hine Project.  That works out to one truckload  every three to five minutes exiting the site across the street from Peregrine, turning left on 7th Street, left on Pennsylvania Avenue, and right on 11th Street to access the SE/SW freeway near Ginko Gardens.  The trucks will operate only on weekdays and between the morning and evening rush hours, the exact timing to be determined by DDOT.  The route for trucks arriving on the site has not yet been determined.  Details were released by Hine Project Construction Manager Matt Harris to the ANC6B Transportation Committee on Wednesday night.

Harris presented the Committee with two plans for construction traffic, one with trucks entering the site at an entrance at Pennsylvania and D Streets and another with the entrance on 8th Street.  As Harris explained, this was in response to concerns of 8th Street neighbors who asked that they not bear the full brunt of having trucks on their street for the entire 18 weeks.  Upon questioning by Commissioner Brian Pate, Harris admitted that there was no reason why the entrance at Pennsylvania and D couldn’t be used for the entire excavation phase.  He did warn that he was uncertain how much DDOT would resist putting an entrance at that location.  Pate asked the Committee to approve a letter from ANC6B to DDOT expressing the strong preference for the Pennsylvania Avenue entrance.  The Committee approved that motion and the letter will be considered by the full ANC6B at its meeting next Tuesday.

Asbestos removal is expected to start next July to kick off the phase 1 (demolition phase) of the Hine project.  Phase 1 will continue through September.  Asbestos from the site will be bagged and placed in dumpsters on the south end of the Hine Playground which will be removed as necessary.  Harris said that it was the intent to try to keep the weekend flea market vendors on the Hine playground for as long as possible.  Details on phase 3 (vertical construction phase) have not yet been presented.

Change of hours of operation and sales for Congressional Liquor, 404 1st Street SE.

Addresses of the houses on the Tour:

Comments Off on The Week Ahead…… 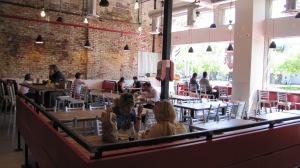 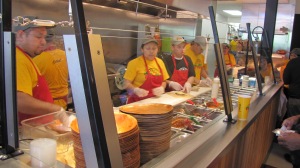 After two days of a soft opening, District Taco’s Capitol Hill location at 656 Pennsylvania Avenue – the space formerly occupied by Yes! – opened for real today.  It joins the recently opened Chipotle and Pacifico Café a block or two away, which are themselves newcomers to a market already served by restaurants like Las Placitas, La Plaza, and the Banana Café.  District Taco prides itself on the freshness and quality of its ingredients.  Hours for the restaurant are 7am – 10pm Monday thru Friday and 10am – 9pm Saturday and Sunday.