Tuesday night, a representative of Douglas Development briefed Francis Campbell’s ANC6b Planning and Zoning Committee on two developments now underway at 1301 and 1442  Pennsylvania Avenue, SE.  Last month, the company announced that it is also leasing the space currently occupied by Cosi at 301 Pennsylvania Avenue, SE, which will soon become an outlet for the high end sandwich shop chain Pret A Manger.

Construction has begun on a commercial building at 1442 Pennsylvania Avenue, SE, next to Wisdom Lounge notable for its eclectic décor and the colorful mural paying tribute to John Phillip Sousa which welcomed those approaching the Capitol from the southeast.  The mural will fall victim to the new construction. 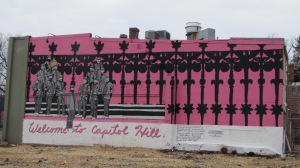 Tribute to John Phillips Sousa on the east wall of Wisdom at 1432 PA Avenue, SE

According to the Douglas spokesman the commercial building is scheduled for completion by mid-December.  No tenants have been signed yet but the company representative said, “We’re not worried.”  Commissioner Brian Flahaven pointed out that a memorandum of understanding has been signed with the neighbors regarding what kind of retail will be permitted.

The project, initially envisioned as commercial, changed in concept to residential/mixed use, but returned to the original commercial concept.  Asked why, the company representative cited several reasons, including the greater height of the residential project, and “economic challenges” including difficulty in getting financing. 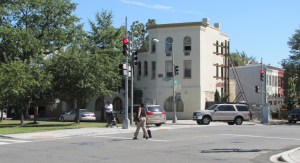 Douglas Development also reported on their commercial project now underway at 1301 Pennsylvania Avenue, SE.  The existing corner building is two stories and a partial third story which will be extended to create additional office space.  “As of now,” the company spokesman said, the building is scheduled to become office space since retail would require granting of parking relief for 12 spaces.  Douglas Development is building as a matter of right, and will not have to seek zoning changes.  The company anticipates completion of the project by mid-March.

ANC6b Chair Brian Flahaven asked his colleagues to evaluate the work of ANC6b and at last week’s Executive Committee meeting, commissioners discussed that evaluation.  The commissioners’ responses – copied below – show little agreement about what ANC6b does well, and some of the responses seem perfunctory.  One or two seem illusory or contradictory.  Regarding how the ANC can improve operations – aside from one flippant response – several commissioners addressed issues of substance,  including improving the website, streamlining both the legislative process (some commissioners feel they have to weigh in on every issue both in committee and before the full commission) and the parliamentary process, and involving more ANC6b residents in meaningful ways.

With respect to the ANC’s top priorities, there was substantial agreement on the Virginia Avenue Tunnel, Barney Circle-SE Boulevard and Reservation 13.  Overlooked among the responses – though mentioned in the meeting – were the redesign of the Eastern Market Metro Plaza and proposals to expand the Capitol Hill Historic District.  Subsequent to the evaluation discussion, ANC6b Treasurer Brian Pate informed the Executive Committee that the surplus fund which has enabled the commission to operate with an annual deficit will be exhausted by the fall of 2015,  and suggested that addressing this issue should be a priority in the coming year.

One commissioner expressed frustration over the dysfunction of the DC bureaucracy – a complaint that goes hand in hand with the unstated reality that the city bureaucracies do not give ANC opinions the “great weight” that city law requires.  Born in 1974 under Home Rule Act, ANCs have evolved into legally representative but marginally effective entities.  When the city is indifferent to commission opinions and unresponsive to commission requests, ANCs become little more than vehicles by which the city pays lip service to its residents.  It is also unclear who commissioners consider their primary constituents: residents, or the local businesses and retailers who come before them for approval of licenses and applications.  Most commissioners would probably suggest some combination of both, but sometimes the ANC’s regard for community input seems cursory.

A web of relations defines the monthly business of the ANC, and some of these relations often go unacknowledged.  Commissioners represent residents and businesses to the city bureaucracies and to each other.  But they can also become part of a ward’s political apparatus and as such can appear to have an institutional bias.  In the case of former Ward Five Councilmember Harry Thomas the ANCs became extensions of his political machine, and ultimately, a venue for neighbors to clash with that political apparatus.  In Ward Six, Councilmember Tommy Wells chose to endorse candidates in some ANC races (including the entire sitting ANC6b in 2010) a move that while not unprecedented was unusual.

During the Executive Committee meeting, commissioners decided to solicit public input regarding the questions Flahaven put to the commission.  While the committee supported the idea of news coverage of the survey, they did not identify other specific mechanisms by which they would solicit public input other than to encourage reporting on the issue.

1.  What does our commission do well?

How can our commission improve how we operate/function?

What are the commission’s top three priorities for the remainder of the year?

Beyond issues we must weigh in on, are there other issues that ANC6B should consider weighing in on to benefit the neighborhood?

Friends of Southeast Library meet at 5:30pm in SE Library to discuss plans for a September book sale and to hear a report on plans for redesigning the Eastern Market Metro Plaza.