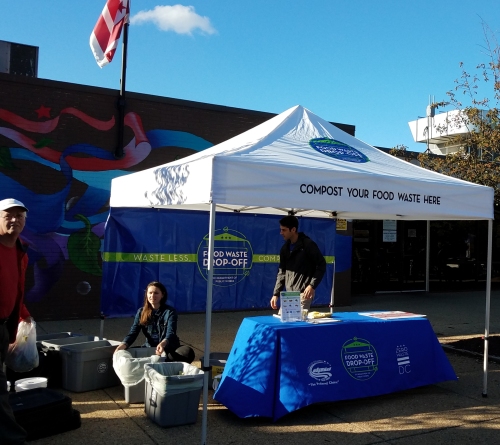 Here’s the DC Department of Public Works’ Food-Waste-to-Compost Drop Off at Rumsey Aquatic Center next to Eastern Market. The drop off is open on Saturdays all year round, from 9:00am until 1:00pm at 635 North Carolina Avenue, SE. David Holmes (at left), former ANC6A Chair, has been a regular contributor since the drop off point opened some three months ago.  For more information, go here:  http://bit.ly/2fCnOIn

Review and Comments on DC Circulator Changes to CH Routes.

522½ K Street, NE, Zoning Adjustment Application of Curt Hansen, for a modification of significance to revise BZA Order No. 13991 to permit the addition of an accessory fast food establishment to an existing retail grocery store, to expand the retail use to the basement, change the operating hours, increase the number of employees from two to seven, and increase the number of seats from zero to eighteen at 522½ K Street NE.  Representative: Curt Hansen.

There is one agenda item, Response to the Final Appraisal Report for Eastern Market.

Agenda not available at press time.