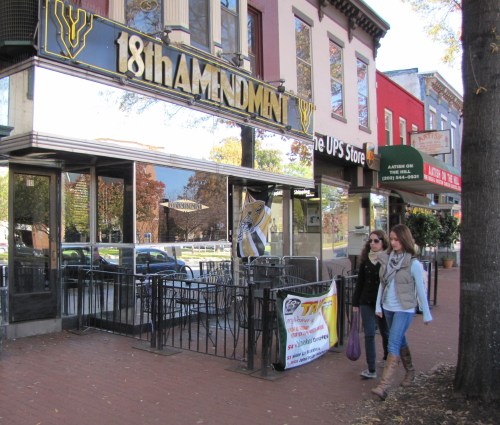 Tuesday night, Matthew Marcou, Deputy Project Manager, DC Department of Transportation, and others will appear before ANC6B responding to a request from Chair Neil Glick.  At issue is the ANC’s authority over the administration of public space, which ultimately comes under the DC Department of Transportation, but only after review and recommendation by the appropriate ANC..  Glick’s request came because at ANC6B’s October meeting ANC6B found that the DOT Public Space Committee had approved a public space permit for a sidewalk café for the 18th Amendment – the bar/restaurant at 613 Pennsylvania Avenue, SE – before the permit request had come before the ANC.  ANC6B is taking umbrage at this preemption of its authority, hence Marcou’s appearance to explain how it happened.  Glick said at the October meeting, “I don’t believe they know how bad the process is.”

Marcou may also get some tough questions concerning another matter raised by a resident attending the October meeting, on the lax enforcement of public space regulations which require six feet between a sidewalk café and a tree box.  A walk down Pennsylvania Avenue at lunch time shows infringements on public space at several establishments.

ANC6B will meet on Tuesday at 7:00pm at the Hill Center.