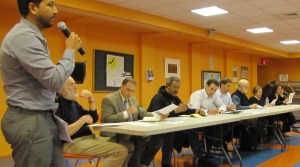 ANC6B’s Hill East Task Force met Monday night to hear Ketan Gada, the Deputy Mayor’s project director for development of Reservation 13, present an update on the current thinking and process for the residential and retail development of two key parcels of land adjacent to the Stadium-Armory Metro.

Since the Redskins have decided to train elsewhere and the prospect for a Georgetown campus on Reservation 13 has faded, the city is pressing ahead with plans to develop the 67 acre site, with the first phase being the mixed use project planned for two parcels totaling 114,000 square feet next to the metro stop.

Three development teams have visited the site in response to the city’s October 4 request for expressions of interest.  Gada said he expects four to five offers to be submitted by the January 7 deadline.  Developers are being asked to provide affordable housing plans for the project under two scenarios – either 30% affordable housing with a limited life span of up to 40 years, or 13% affordable housing which would remain affordable in perpetuity.

According to Gada, after January 7, the Deputy Mayor’s office will select those developers who have been “most responsive” to the city’s criteria and those developers will be asked to make presentations to the ANC.  Since Reservation 13 is now in Ward 7’s ANC7F, that ANC would ordinarily be the most directly involved.  However, ANC6B Commissioners Brian Flahaven and Francis Campbell are strong advocates of the involvement for ANC6B, since their single member districts are adjacent the project.  Flahaven, chair of the Hill East Taskforce, stated that he hopes developer presentations can be made to a joint committee comprised of both ANC6B and ANC7F, and Gada seemed receptive to that proposal.

About 15 residents turned out for last night’s meeting, and some of the issues raised by both those in the audience and by members of the Taskforce included concerns regarding the relocation of social services on the site, preservation of Anacostia waterfront green space, the fifty foot height of the project’s buildings facing 19th Street, and safeguarding the continuity of the plan against randomness of piecemeal development.

Flahaven asserted it was the responsibility of the residents and the ANC to “keep folks accountable,” but one member of the audience, James Ray, voiced skepticism of the Deputy Mayor’s commitment to the restrictions of the Master Plan noting that “residents feel powerless when Mayor Gray pulls a fast one with the Redskins Training facility” proposal.

Flahaven said that the people most invested in the project are those who live closest to it and went on, “We’re stuck with what we have – we have the most to gain and to lose if it’s done incorrectly.”  Residents who seek input should bear the recent Hine experience in mind.  During that process, many meetings were held, but nearby residents were left feeling that many of their most important concerns went unaddressed.