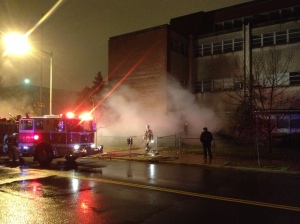 Firefighters responded to a fire at the former Hine Jr. High School about 11:30pm on Tuesday night.  The fire apparently was caused by a homeless person who started a campfire behind the shrubs on the property facing 8th Street.  According to neighbors, police have been involved several times previously on this issue.

Concerned neighbors have written to Councilmember Wells to inquire who is responsible for cleanup of burned debris along 8th Street and removing remaining shrubbery to prevent reoccurrence of this problem.

Neighbors are understandably concerned about fire, many residents remembering the early morning 3 alarm fire that all but destroyed Eastern Market on April 30, 2007.

The Hine building is scheduled to be demolished starting sometime this fall to make way for Stanton-Eastbanc’s mixed use development.

One response to “Firefighters Respond to Fire at Hine Jr. High Tuesday Night”