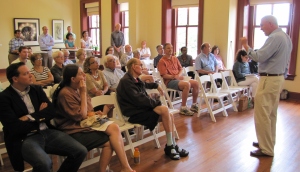 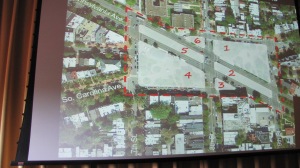 Last week, two public meetings were held to solicit community idea for redesign of the Eastern Market Metro Plaza and parks.  Barracks Row Main Street has $500,000 in congressionally appropriated funds for planning the redesign of the Plaza which must be spent by the end of the fiscal year – September 30.  Esocoff & Associates Architects (Hine Development architect Amy Weinstein’s firm) has been given the contract to provide a design concept following an opportunity for community input.  The planning funds also cover contracts with Oehme van Sweden Landscape Architects, transportation engineering planners, and Minerva Marketing Public Relations. David Perry, head of Barracks Row/Main Street, said an additional $1 million in congressionally approved funds are available to begin implementing whatever plan is decided upon.  These funds are not subject to termination at the end of September but will remain available for an indeterminate period.

Wells told the two meetings – one last Monday night attended by about 50 people and one on Saturday morning attended by some 25 people, that there is no current plan for the new design, but there are some guiding principles about what should be done and some limitations on what can be done.  The main guiding principle, Wells said, is that the Plaza and associated parks around it should be “pretty.”   The limitations include the practical impossibility of subterranean tunnels or street levels, the presence of the Metro itself, and oversight by both the National Park Service – which controls the median on Pennsylvania Avenue – and city agencies.  Wells said that how much the community decides to do will determine how much outside money will be needed.

The process, now that the preliminary meetings have been held to request community input, will be as follows.

As of, Saturday, July 13, 2013 and until August 6, a display and suggestion box will be placed in the North Hall of Eastern Market to solicit input from those unable to attend either public meeting this past week.

On July 17, an interactive website will be available at www.easternmarketmetropark.org.  The website will allow the viewer to click on a specific location on an aerial map of the plaza, the adjacent parks, and the two portions of the median strips between 7th and 9th Streets, numbered 1 – 6 in the photo above.  Clicking on a spot will open up a comment box that will allow the viewer to leave a remark about that specific location.

By August 10th, according to David Perry, there will be a Taskforce Meeting to analyze the input from the public.  The Taskforce will be made up of groups of stakeholders which will include – but not be limited to – the ANC’ (representatives of ANC6B and ANC6A attended the public meetings), the residents and businesses facing the Plaza and parks, Eastern Market Row (7th Street) businesses, Celebrate Capitol Hill, Capitol Hill BID, CHRS, Barracks Row/Main Street, Capitol Hill Community Foundation, Capitol Hill Garden Club, National Capitol Church, and Friends of Southeast Library.  One glaring omission from the list was Community Connections, which fronts on the triangle park across from Dunkin’ Donuts.

Initially, Wells said, “my admonition to (the organizers) is to don’t make the Taskforce Meeting a Town Hall meeting.”  Asked later if there was a way to open up the Taskforce deliberations to the public and press without making it a Town Hall meeting, Wells replied that “as Councilmember, I would ask that the deliberations be open” and beyond that, he said, it might mean that practically it would be open to “anyone communicating to the public by some device.”  It was the understanding of those present that this meant members of the accredited press as well as unaccredited bloggers.

The Task Force report should be available two weeks after the Task Force concludes its meeting(s).  The recommendations of the Taskforce will be submitted to Amy Weinstein and Oehme Van Sweden and the transportation engineers who will produce a design concept and mock up in about two months – late October – which will then be presented to a large community meeting.

Community feedback will again be sought, and that information will be used to refine the plan until a final concept can be created upon which Requests for Proposals (RFPs) can be based.  Wells said that how quickly the RFP stage can be reached depends on how quickly money becomes available.

Some proposed features for the design concept which emerged from the working groups at the two meetings last week include:  shade, a water feature, better maintenance, a playground, attractive seating and lighting, making Southeast Library a feature of the design, bike parking, public art, a community gathering space, chess tables, an environment that will attract people, prevention of jay walking across the median, a mosaic, an information center, a gazebo, a sustainable rain garden, preserving the rights of marginalized citizens to use public space, a concert space, attractive trash cans, a fence, underground irrigation, a history kiosk, planters, removal of publication vending machines and bike coffins, unimpeded access to Metro (relocating the bus stop next to Metro), and directional signage.