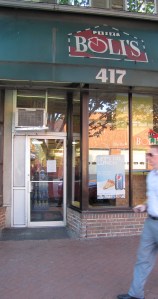 Pizza Bolis Ordered To Close by DC Department of Health

On Monday, neighbors complained about ongoing rat, garbage and noise issues at Barracks Row’s Pizza Bolis at 417 8th Street, SE.  Today, the carryout was closed by order of the DC Department of Health after an inspection revealed several critical and non-critical violations resulting in a summary order to cease and desist all operations immediately.  A compliance inspection will be conducted after corrections are made and an inspection report will be posted within five days for viewing.  The complaint went to Food Safety and Hygiene Inspection Services, DC Department of Health; ANC6B commissioners; and the Executive Director of Barracks Row/Main Street.

The complaint specified “uncontained garbage and plastic food bins” behind Pizza Bolis and cited the “many, many years” of ongoing problems with rats and noise pollution from the carryout.  An inspection in January of 2013 following neighbor complaints found numerous violations but a follow-up inspection indicated the problems had been corrected.

However, as of Monday, the neighbors said, Bolis was storing garbage in open and lidless dumpsters behind the restaurant, which “are creating real health issues, particularly in light of the current heat wave.”  Neighbors also point to the pizza place as the source of a prevalent rat problem evidenced by burrows in the back of neighboring businesses.  In contrast to Pizza Bolis, the neighbors applauded Chipotle, saying “that the garbage disposal procedures (there) are currently very good.”