Hine Has Its Day In Court 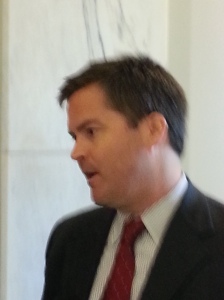 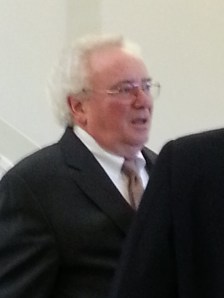 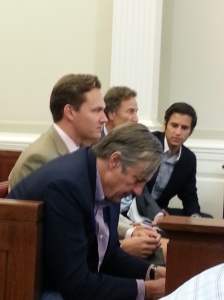 Hine Has Its Day In Court

A three member DC Court of Appeals heard arguments in the appeal of the Zoning Commission’s (ZC) decision approving the Hine development this morning.  Some 25 Capitol Hill residents attended the hearing.

The plaintiff’s attorney, Oliver Hall, argued that the ZC had violated its charter in three instances:  when it permitted Stanton/Eastbanc (SEB) to rely on documents that it did not submit to the Commission or make available in the public record; when ZC failed to issue a specific finding that the 94.5 foot height was appropriate for the Historic District; and when it failed to ensure that the project’s affordable housing met Inclusionary Zoning requirements.  The issue, Hall summarized, hinged on a question of fundamental fairness.

With respect to the failure to submit documents, Hall asserted that this kept from the ZC the knowledge that community benefits and amenities cited by SEB, specifically $50,000 for Metro Plaza improvements and $75,000 for a playground, were in fact paid for by taxpayers – a fact discovered only after the plaintiffs received some of the withheld documents in response to a Freedom of Information Act request.  The ZC is required to determine whether the benefits and amenities balance the developer’s request for zoning relief and Hall called the ZC finding that it did “misleading if not false.”

Hall also said that the ZC gave “great weight” to the ANC opinion, and had the ANC commissioners who voted for a positive recommendation known that the developer would be reimbursed by the city, they might not have supported the PUD request.

As was reported earlier on Capitol Hill Corner, a divided ANC narrowly endorsed the Hine Project on June 12, 2012, by a vote of 6-4.  During the debate on the measure, four Commissioners specifically cited the benefits package as one reason for their support, one going so far as to say that it was a determining factor in her support.  Hine Subcommittee Chair and benefit package negotiator Ivan Frishberg supported the benefits package stating that the process had not been ideal, but had been dictated by what the city did.  “DMPED [Deputy Mayor for Planning and Economic Development) got a great deal for city – not so great for neighbors.”  He said he still believed this will be “a benefit to the community and the benefits package is fair and more productive than others I’ve seen.”  Subcommittee Vice Chair Brian Pate supported the deal saying, “I’ll stand by the benefits package and continue to work to mitigate the impact of the development on the community.”  Commissioner Brian Flahaven, also a supporter, said the benefits package was a good balance between the interests of the neighbors and the interests of Capitol Hill.  Commissioner Kirsten Oldenberg said she had been disappointed in the initial benefits package unveiled the previous week, but as revised by the additional concessions, she could support it.  A nay vote by any of these commissioners would have killed the ANC endorsement, which was in turn relied upon heavily by the Zoning Commission in its ruling.

In court today, the judges questioned SEB attorney Vincent Policy regarding the payments for benefits.  Policy first said it was comparable to the West End Library case, and when the court seemed unconvinced, Policy said it was the deal cut by the city and the question of the source of the funding was not before the ZC.  Further, he said, “If it was so important, petitioners should have raised it before.”

Also left unclear in the subsequent discussion was the central question about what happens to the affordable housing after 40 years when the units become market value units, though the fact that the parcel on which the units sit was sold outright to SEB seems to indicate they would have some standing to claim ownership.  Hall said the only fair reading of the closing documents is that after 40 years the Inclusionary Zoning requirements expire and “we are left to speculate what will happen.  No guarantee.”

Opposing attorney Vincent Policy was questioned on whether there was sufficient square footage devoted to affordable housing and said in response that the ZC determined that the affordable housing was a public amenity and that the Inclusionary Zoning issue was not before them because of an exemption granted by the Zoning Administrator.  Asked who would make the Inclusionary Zoning requirement binding after 40 years, Policy replied, “the Zoning Administrator.”  With respect to the square footage issue, Policy said, “If the ZC doesn’t know, I’m dumbfounded.”  He went on to assert that the exemption makes the square footage requirement irrelevant.  He said that the ZC was aware of the space devoted to affordable housing but “chose to express it [its calculation] in a different way.”   At that point, the court sharply corrected Policy, saying “You chose to express it in a different way,” underlining the reliance of the ZC on the developer to provide much of the language in the actual zoning order.  Policy replied that the number of units exceeded the Inclusionary Zoning requirement and the Zoning Commission found that the developer exceeded the requirement, not only complied with it.

Hall rebutted saying even exempted projects must set aside same square footage for affordable housing for the life of project and added, “Our calculations show square footage is not sufficient.”

There was less give and take on the height issue, with Hall asserting that the height was addressed in the brief, but not in the zoning order: “Nowhere does it say that the development tops out at 94.5 feet.”  Hall said “The question is, can the ZC approve the project without specifically addressing the height?  Is 94.5 feet ok even though it is next to 30 or 40 foot buildings?  The ZC must consider this before determining it is appropriate.”  Policy replied that he was “incredulous” and said that “the ZC addressed the 94.5 feet height in dozens of places.”  He pointed out that the entire project was not 94.5 feet and that the height was dispersed throughout the project which was stepped down on residential and commercial sides.

The court will issue a ruling on the appeal in the coming months, though timing is uncertain.  In the meantime, according to terms of one of the documents (the second amendment to the LDDA) obtained under a Freedom of Information Request by the plaintiffs, SEB may undertake removal of asbestos, demolition and related preparations of the site before the Finance Closing, under conditions set by the city, one of which is anticipation that construction will begin within 180 days from the start of demolition.

Comments Off on Hine Has Its Day In Court