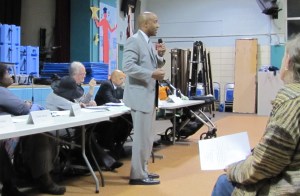 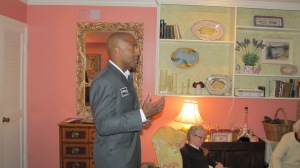 “This position should not be inherited – you should have to earn it.”

by Larry Janezich
Darrel Thompson campaigned on Capitol Hill the past few days, after time spent working the NOMA Gallaudet and Waterfront Metros.  On Thursday night, he appeared at his neighborhood ANC6A meeting and at an Eastern Market neighborhood meet and greet on Sunday.  Thompson launched his bid to succeed Ward 6 Councilmember Tommy Wells on October 6, 2013.

On Sunday, Thompson said that if elected, he would draw from his 20 years of experience working in politics, and in particular his record of working on DC issues (including local autonomy and DC Statehood) while Deputy Chief of Staff for Senate Majority Leader Harry Reid.  Thompson told a group of neighbors: “This position should not be inherited – you should have to earn it.  There shouldn’t be a handful of people saying, ‘You’re the guy.’ You should have to earn it.”

Thompson was born in DC and he and his wife are longtime Ward Six residents.  In addition to working for Reid, Thompson was the former Chief of Staff to Barack Obama’s U.S. Senate Campaign.  He is a graduate of Morgan State University and the John F. Kennedy School of Government, Harvard University.