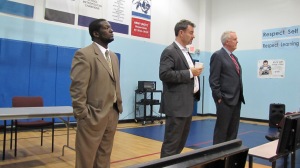 A light turnout for the community meeting on the future of Options.

A small crowd of some 30 people attended a community meeting hosted by Ward 6 Councilmember Tommy Wells on the future of the Options Charter School.  The school went into receivership on October 3rd under the cloud of alleged financial management by school administrators.  Josh Kern was appointed receiver (see CHC  http://bit.ly/18Tpxjp) by the court, and he was joined at the meeting by Options principal Dr. Simon Earle and Public Charter School Board (PCSB) Chair Scott Pearson.

The organizers of the meeting came under fire from some in the audience who faulted the lack of notice of the meeting to parents of children attending Options.  Others faulted school administrators for failing to open and maintain lines of communication with the community.  When asked who the meeting was for, Councilmember Wells replied that it was for the people “who came tonight.”  Kerns stepped up to say it was his responsibility to reach out to parents and promised a follow up meeting in the near future for parents only.

A number of residents attending the meeting used the opportunity to cite specific examples of serious misbehavior of Option students on their way to or coming from school.  Several residents pointed to examples of unprofessional behavior by Options staff as well as lax supervision, as well as failures of school representatives to respond to residents when concerns were raised.  One resident raised the issue of the campaign contributions totaling $3,000 that Councilmember Wells had received from Board members for his mayoral bid, contributions he subsequently returned.

A Rosedale librarian rose to offer that her interactions with Options students after school had been very positive, and others spoke of the need to encourage community interactions with the school that are broader than fault-finding or problem-solving.

Kerns pledged to undertake training programs for staff and other unspecified measures and to come back to the community after a period of time to ask for a judgment on whether the changes have had a positive impact.

Asked how the process to decide what will happen to Options will unfold, Pearson said that the seven member PCSB will meet December 16 to make a decision or whether to revoke the Options School Charter.  He said that if the board found that “the school had engaged in a pattern of financial mismanagement the board must revoke the charter.”  That event would in turn trigger a process involving more meetings with the community and parents.  Options would have 15 days after a vote to revoke to request a hearing.  That hearing must occur within 30 days of the request, but Pearson said it would happen as soon as a week after the request.

The board would then decide whether it would be in the best interests of the students to bring in another operator for the school – and it appears that would depend on the ability of receiver Josh Kerns to get the school back on its feet – or to close the school.  It is unclear why the Public Charter School Board, which has arguably been derelict in its oversight duty regarding Options, was left to decide the fate of the school.  In any event, parents and the community will know the fate of Options before the enrollment for the next semester in early February.

Among those in attendance tonight were the two current candidates for the Ward Six Council seat Charles Allen and Darrel Thompson.  Only a single commissioner from ANC6A wherein Options lies showed up for the meeting – Commissioner Phillips-Gilbert.  The ANC has urged PCSB to keep the school open but relocate it to a larger unspecified building.