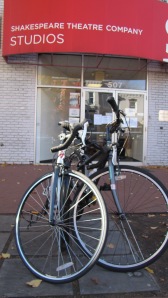 Last week, the Washington Post’s Jonathan O’Connell reported that the Shakespeare Theater is looking to the former campus of Southeastern University at 6th and I Streets,  SW,  as a new home for rehearsal, storage, and artist living space.  http://bit.ly/1fcutla

The article related an attempt several years ago by Shakespeare’s managing director, Chris Jennings, to cut a deal with Stanton East Banc (SEB) developers to occupy a portion of the forthcoming Hine development at Eastern Market.  In the article, Jennings accused East Banc of using the relationship with the theater to help win the bid from the city, but then priced the theater out of the project.

Capitol Hill Corner reached out to East Banc for reaction to Jennings’ claim and received the following response from Anthony Lanier, head of East Banc:

“[A]s can be confirmed by Chris Jennings, both parties spent considerable effort to create a zero margin “box” to suit the Shakespeare’s needs, only to arrive at the conclusion, that to build a new back of the house set of spaces simply became to (sic) expensive for Shakespeare to commit to; that fact, combined with the “contingency”, that the money from the theater was subject to a fundraising campaign whose outcome couldn’t be pre-determined, multiplied by the tight milestone schedule under which the design and approvals had to proceed, made the effort unfeasible.  The developer viewed the Shakespeare’s involvement as a unique opportunity to create a special place.  Their involvement certainly was not used to win the award.  Both parties left the table, after having expended significant resources and planning dollars, in agreement that the combination of cost, timing and schedule made the project overreaching and therefore, unfeasible.”

Capitol Hill Corner asked Shakespeare’s Jennings for reaction and received his comment in an email forwarded by a Shakespeare spokesperson.  “Shakespeare Theater agrees – both parties tried in good faith to create a deal that would meet both needs.  And we were thrilled that East Banc sought to enliven their development with our theater company.”

The Washington Post article was the first that many Capitol residents heard that the Shakespeare company was no longer pursuing housing for actors in the Hine project.  In February of 2011, Stanton Development, East Banc’s partner in the Hine project, told the community that the Shakespeare Theater has decided to keep its administrative offices in place on Barracks Row but would house its visiting performers in the Hine development.

Capitol Hill Corner asked the Shakespeare Theater when the decision had been made not to pursue actors’ housing in the project and received the following response from spokesperson Lindsay Tolar:  “Currently we have no agreement for actor housing with East Banc or any other developer.  We continue to explore comprehensive options for all of our support facilities including our artist housing.”   The same question, when put to Stanton Development, received no response.

It would appear that sometime after February of 2011 the Shakespeare housing component was quietly dropped from the project.  Exactly how and when that came about is uncertain.

The Washington Post article says that financing for the Shakespeare’s move into SW is uncertain, but speculates that a possible solution could be found where market rate housing in a mixed use building could subsidize the use of the space by the theater company.   The article says that Jennings also plans to ask the city for assistance.