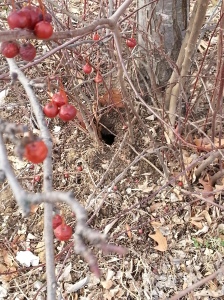 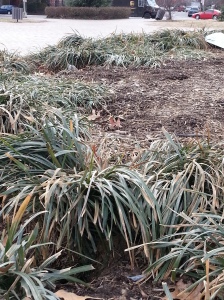 Frishberg told the Task Force that a major problem is that city agencies don’t talk to each other and no agency professes to have sole jurisdiction over the Plaza.  On January 24, he and Oldenburg convened a meeting attended by the Department of Health (DOH), District Department of Transportation (DDOT), ANC Commissioners, community leaders, and the Capitol Hill Bid to discuss the rodent infestation on the Plaza.

Frishberg told the Task Force that the Department of Health advises that they just can’t put out poison and hope to be effective and that the infrastructure which supports rat dwellings must be addressed.  This, they advised, will necessitate action by other agencies.

As the result of the meeting, DOH recommends the following habitat modification and integrated pest management measures:

2. Modify the landscaping of the three large circular planting beds on the Plaza to achieve an easy-to-maintain, aesthetically pleasing rodent-resistant habitat using river stone mulch.  Just prior of re-landscaping, the three round planting beds, which are riddled with rodent burrows, will be subject to a month of intensive baiting by the Rodent Control Division of the Bureau of Community Hygiene, DOH.  DOH outlines a five step procedure for the three planting areas:

Follow up with frequent inspections, regularly bait the space.

Frishberg explained that ANC6B approval would move the process forward and allow commissioners to begin discussions with agencies on implementation of the recommendations.  He expects that the Department of General Services would be the agency responsible for coordinating the effort.  No time frame was discussed regarding the DOH proposal, and the DDOT is notoriously unresponsive to community and ANC requests across the city.  Capitol Hill Corner will report on the city’s progress in responding to the ongoing concerns of neighbors and Barracks Row businesses.