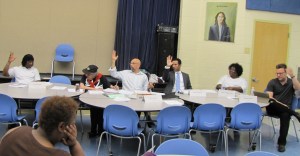 Last Thursday night, at ANC6A’s May meeting, DDOT announced a policy change aimed at placating ANC 6A Commissioners who expressed concern about DDOT control over the city’s triangle or pocket parks.  An application to fence in a fragment of a triangle park at 147 Tennessee Avenue, NE, and ANC6A’s demands for transfer of control of these parks away from the agency prompted the changes.

Presumably in response to ANC6A votes scheduled to occur Thursday night, DDOT dispatched DDOT policy official Alice Kelly to announce a new DDOT Departmental Order prior to the votes.  She carried only a few copies of the order with her to the meeting, and summarized its major components for those in attendance.

According to Kelly the policy provides a new DDOT review process and standards of evaluation for public space permits affecting triangle or pocket parks which are currently categorized by the Department as “public parking” – space like Capitol Hill’s front yards, owned by the city but maintained by homeowners and often fenced-in.  The new standards for these parks provide that there can be no change in function as public open space; public access must be preserved, any improvements must promote public enjoyment and use of the park, and ANC review of permit applications.

There was a hint that other elements of city government were watching what ANC6A was doing Thursday night.  Although possibly coincidental, the rare appearance at the meeting of Gottlieb Simon, Executive Director of the DC Office of Advisory Neighborhood Commissions, nevertheless heightened the awareness of commissioners of the city government’s interest in the matter, as well as the controversy it has sparked.

For months now, the neighborhood north of Lincoln Park has been embroiled over an attempt to establish that a piece of city-owned land adjacent to a home at 147 Tennessee Avenue, NE, should be treated in an identical manner as the city-owned land comprising the front yard of the homeowner –  and all of the other front yards in DC.  DDOT regulations supported that view and DDOT Director Terry Bellemy told ANC6A as much in a letter dated October 25, 2013.

The case had multiple layers of complexity and combativeness, including a sense of entitlement by the homeowners in question and a corresponding one by some nearby neighbors; allegations of bad process on the part of both DDOT and ANC6A; lack of communication, dissemination of mis-information; and allegations of bad behavior by residents and one elected official.

The homeowners at 147 Tennessee Avenue, NE, have, over some 20 years, invested considerable money and effort in landscaping the adjacent triangle park.  The space is divided by a street (which is why DDOT has control of these parks) and the smaller portion adjoins 147 Tennessee Avenue.  The homeowners’ investment came after receiving official DDOT sanction to landscape the plot.  They subsequently applied for a permit to install a historic fence to fence off the smaller portion adjoining their home, they say, to protect the landscaping and their community investment.

Other neighbors opposed any proposal to fence the land, citing the need to walk their dogs or their historic affection for the land, but most frequently their resentment at what they saw as a neighbor attempting to appropriate public land for personal use.  While expressing appreciation for the beautification efforts, these neighbors felt their own sense of entitlement to continue treating the space as “public space” with unrestricted public access.  The need of the neighbors to use the smaller potion seems less compelling on examining the small size of the space involved and its proximity to the home in question and to the larger remaining portion of the triangle park as well as to Lincoln Park a block away.  Neighbors and commissioners voiced concerns that the case could set a precedent which would allow for the privatization of public lands across the city, which, one commissioner said, would “deprive low-income families who cannot vacation a place to enjoy recreation.”

ANC6A’s Transportation and Public Space committee chose to side with these neighbors.  A committee meeting last month to consider the application for the fence was characterized by ANC6A Commissioner Gilbert-Phillips as “chaos”.  She said she was “very disappointed” at the “bullying” treatment the homeowner received from neighbors hostile to the fence plan.  The committee voted unanimously to recommend that the full ANC oppose the application to erect a fence on the basis that a fence “will further detract from the historic appearance” of the (space which was originally a single triangular park) “and more importantly, the fence would prevent public access.”  The committee also aggressively recommended 1) that the ANC ask DDOT to correct their characterization of triangle parks as “public parking, 2) that Councilmember Cheh take steps to transfer control of triangle parks from DDOT to the Department of Parks and Recreation, and 3) ask that the City Council declare pocket parks public space.

The passionate feelings of some in the community spilled over into action.  The homeowners say that some of the neighbors – including current ANC6A Chair Nick Alberti – took matters into their own hands, going out of their way to occupy the space adjacent to 147 Tennessee by repeatedly walking their dogs through and over the plants and shrubbery in a seemingly deliberate fashion.  Some neighbors have accused the homeowner of too aggressively defending their plantings and landscaping not only by personal confrontations, but going so far as to seek restraining orders against two of the neighbors, one of whom was Alberti.  The homeowners say they did so upon the recommendation of the Metropolitan Police Department.

After a discussing the issue and acknowledging that DDOT’s new policy as articulated by Kelly was a step in the right direction, the commission proceeded to vote 4 – 1 to ask DDOT to correct the characterization of pocket parks and “public parking.”

At that point, Commissioner Omar Mahmud, chair of the Transportation and Public Space Committee appeared ambivalent about pursuing votes on the remaining motions, saying that the policy order presented by Kelly seemed to address the remaining concerns.

ANC6A Chair Alberti, however, pressed to continue with votes on the remaining motions, saying, “If DDOT doesn’t focus on them, they won’t pay attention to my issues.”

Subsequently, the motions recommending Councilmember Cheh  take steps to transfer triangle parks under DDOT to Department of Parks and Recreation, asking the City Council to declare pocket parks public space, and to oppose the application of the homeowners at 147 Tennessee Avenue  to erect a fence around a fragment of the triangle park (currently designated as “public parking by DDOT), all passed 4 – 1, with commissioners Alberti, Wood, Mahmud, and Hysell voting in the affirmative and commissioner Phillips-Gilbert voting in the negative.  Commissioner Jay Williams who was necessarily absent said he would have voted with the majority, if present.

This is not the first time our local ANC’s have crossed swords with DDOT on public space or transportation issues.  There is a long history in both ANC6A and ANC6B of what commissioners see as cavalier disregard of the “great weight” agencies are supposed to give to ANC opinions as well as failure to follow through on DDOT initiatives.  DDOT Director Terry Bellemy announced his resignation for a position in Prince George’s County shortly after Councilmember Muriel Bowser won the Democratic nomination for mayor.  That resignation was to be effective at the end of April.  Bellemy signed the new DDOT Departmental order on April 30.

For more background on the legal details of the case, see The Hill Rag,: http://bit.ly/1fTg69M