Pop Up at Independence Avenue and 17th, SE

Pop Up Near Pennsylvania Avenue and 15th Street, SE 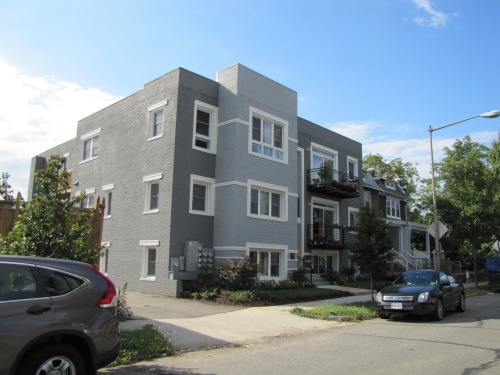 In Hill East, immediately outside of the boundaries of the Capitol Hill Historic District, development has trended toward condo​s ​for young​er DC residents.

In addition to stand alone multi-residential units, some of the development has taken the form of pop up additions to row houses – both for the purpose of adding living space for families ​and the conversion of single family units to multiple residential units by developers.

This conversion of existing housing stock to multi-residential units is blamed by the Office of Planning (OP) for pushing up the prices of existing townhouses, as developers pay more for properties to convert them than the homeowners who intend to reside in them.

To that end, OP is proposing a series of amendments to the zoning regulations to make it more difficult to build pop ups and to convert row houses to multifamily units.

1) Reduce building height for row houses in residential districts from 40 to 35 feet without special exception;

2) Change the definition of “mezzanine” to include these partial floors in the number of stories permitted in a residential zone; and,

3) Eliminate a zoning law provision that allows for the conversion of row houses to multi-family (more than 2) buildings.

These changes might be a tough sell in areas where the potential for easy pop ups and additions increase the value of existing housing stock. Homeowners there are caught between desire for increasing property values and trying to maintain the character of neighborhoods.

​As the accompanying photographs illustrate, much of that character has already deteriorated, owing either to pop-ups or to developments that – in distinct contrast to the historic preservation areas where residential development is held to perhaps too exacting a standard – give the residents a sense that there is no threshold whatsoever to meet when it comes to building in Hill East.

ANC6B will soon have an opportunity to weigh in on the proposed zoning regulation changes which could be the subject of public hearings in late October or early November.  On August 4, ANC1A in Columbia Heights and ANC1B in the U Street District, held a joint meeting to hear presentations by representatives of the Office of Planning on the proposed changes to the zoning regulations as well as legislation currently being drafted to provide for the creation (by neighborhood petition) of “conservation zones” which would require Historic Preservation Office review of any major alteration or expansion of existing row houses.  See posting on the blog “Short Articles About Long Meetings” (SALM)) here http://bit.ly/1Ch32mA

12 responses to “Pop Ups and Development in Hill East”