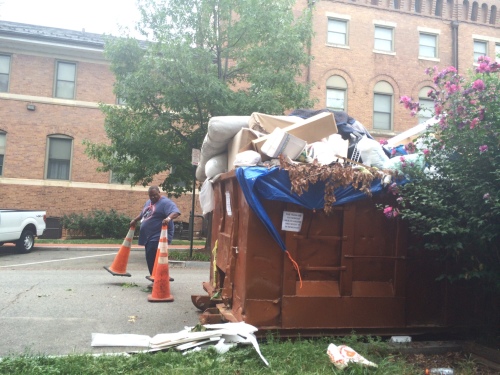 Ninth street residents who became the victim of both a negligent contractor and the contracting homeowner as well as the lack of response by the city when they sought help in resolving a trash issue have been issued a citation for not addressing the problem themselves.

Last March, a contractor engaged in a renovation project on the 700 block of 9th Street, SE, placed a dumpster (by order of an Emergency No Parking permit, valid through the first week of August) mostly in front of a property at 736 9th Street adjacent to the job site.  The address has been the residence for the past 43 years of David and Adrienne Umansky.

As the renovation progressed, the dumpster was emptied once and replaced.  Before being hauled off again, however, the contractor went bankrupt, and despite being covered by a tarp, the dumpster gradually attracted a mountain of trash and garbage from nearby residents and passersby.

According to the Umanskys, the owner of the property being renovated tried but was unable to find the company who owned the dumpster “since the contractor was bankrupt. “  The Umanskys and their neighbors, they say, called 311 to report the problem numerous times in June and July with no response to their concerns.

Finally, last week the city moved to address the problem.  ANC Commissioner Kirsten Oldenburg was instrumental in finally getting the city to take notice.  Oldenburg told CHC, “When neighbors reported the overflowing dumpster to me, I called the [DDOT] Deputy Associate Director who directed inspectors to check out the matter.  Over the course of a week, citations were issued to both the dumpster firm and the contractor who had hired the dumpster.  The firm tried to remove the dumpster several times but could not because of a car parked in front of it.  On Tuesday, September 9, [DDOT] Inspector McCreary got DPW to tow away the parked car and the dumpster was removed.  At [Tuesday night’s ANC6B] meeting I thanked DDOT’s Public Space Regulations Administration and, especially their Inspector McCreary who doggedly managed to resolve a very messy and complicated situation.”

Grateful for finally having the problem resolved, the Umanskys were less happy when they received a citation last Thursday levying a $75 fine for “Failure to maintain abutting public space.”  The ticket was accompanied by a photo of trash which had been placed next to the dumpster.  The Umanskys have reached out to DDOT to appeal the ticket and left messages, but as yet have received no response.

Last Thursday night, the neighboring ANC6A north of East Capitol, sent a letter to DDOT asking them for information regarding the process for issuing emergency no-parking permits and opportunities for the ANC to weigh in on longer-term permits.  No such action has yet been considered by ANC6b.