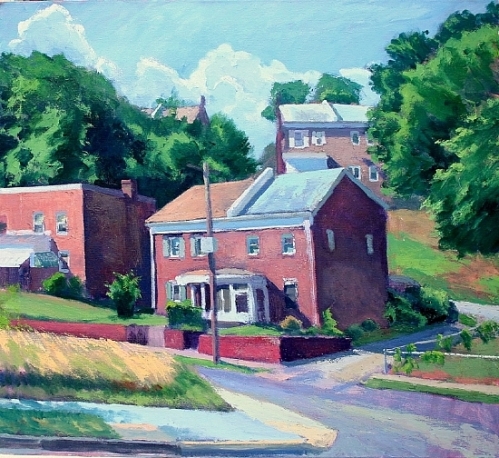 Brett Busang is a DC based American realist painter who currently lives near H Street, Northeast.  He paints the realities of the urban environment and has a fondness for the grittiness of alleys and garages but his work also features, empty lots, facades of storefronts and row houses, bridges, and industrial and construction sites – and no people.  Most are exteriors – studies in sunlight and shadow – with an interior scene being the rare exception.  The themes of the pieces concern change, a sense of anticipation, and the loneliness and anonymity of urban life.  His work recalls that of Edward Hopper, and Busang acknowledges his debt to that painter.

Many of Busang’s pieces featured on his website (Here:  http://bit.ly/XH7QB2) are accompanied by a “narrative” – an anecdotal-rich essay which often chronicles change and places the work in context.

He has exhibited at the Museum of the City of New York City; the Everson Museum, in Syracuse, NY; the Greenville Museum of Art, in Greenville, NC.  Busang is also a writer and commentator; his writing has appeared in American Artist, The Artist’s Magazine, American Art Review, the New York Press and New York Newsday.  He was born in 1954.

Busang’s narrative for “Carports and Clouds, Northeast DC” is reproduced below:

“Northeast Washington reminds me a little of Queens, which sprawls somewhat more evenly between the East River and, I think, Duchess County.  Queens is considered subpar compared to Brooklyn; safer than the Bronx; and as unremarkable as a hamburger patty.  It is the home of immigrants too numerous and incomprehensible to name.  Its history is an amalgam of lousy breaks and easy living.  And its people are such chips off the old block that, when they have a chance to leave, they keep a little place handy so they can always come back.

I am not aware of such affection emanating from Northeast DC.  It sprawls, but it can also contract.  Its population is not nearly so diversified, being mostly black, but it is sprinkled with recent immigrants as well as hopeful newbies, who take a chance on the place because it is very likely the only place – in Washington, DC – they can afford to live.  I don’t know how big it is and don’t care.  Yet I have spent so much time in it that I am always wondering about its parameters.  How was it, or all places, given such license to grow?  Or is its growth organic – a sort of happy virus that leaps over boundaries and keeps going because nobody cares to stop it?  Because of its sprawling character, Northeast is not easily quantified.  Northeast is Capitol Hill, but it is also Trinidad.  Northeast is a single lane that runs parallel to H, but peters out when it reaches a cross-street and is never found again.  Northeast eats at home more than other places – though it drinks out of paper bags and likes to break its bottles against a curbstone because they might, in this second life they’ve been given, puncture a brand-new tire. Northeast is as restless as a cat, but climbs fences it already knows and sticks to them.  Northeast sits on a hill at Mt. Olivet Cemetery, where hardship has been mastered and there are no rent disputes anymore.  It gazes in wonder from the Arboretum, from which the human world seems as chaotic as a three-alarm fire.

Northeast is dirty-ochre and salmon-pink.  Its middle-greys will get darker while its concrete repairs turn yellow overnight.  Northeast is a cache of plastic bottles and discarded billfolds.  It reeks of the stuff for which “nicer” neighborhoods have no name.  Yet it lives prosperously “on the hill” where prams are pushed and neighborly disagreements are arbitrated by law.  Across H, things aren’t so nice, though people are sandblasting old brick, re-painting woodwork, and making stacks of cobblestones so that they might, at some point, be returned to where they came from.

Italians used to be here, and Jewish people too.  And a great many nuns, who die more mysteriously than other people.

Wardman blocks mean something in Northeast, as do storm drains and Harlequin novels.  If asked, some people will say they miss the Senators, which were of a Northeastern mentality because they never won anything and didn’t expect to.  The Senators were about keeping the faith and holding steady.

In Brookland, its lawns are tidy, its streets are in good repair, and its inner life is crowned with rosaries, and tabernacles.  And over in Eckington – which may not be in Northeast at all – it roller-coasters up and down so much, nobody wants to go outside.

Its townhouses are needy-looking, its trees are ragged, and its lavender-mint is flavored with acid rain.  Its stray cats run rampant and are never trapped and neutered.  And its old men remember their childhoods as being more quiet, but not as complicated as the ones they see.

History has happened here and looks it – which is why it doesn’t “scan”.  (Most people prefer history on a plaque or seminar.)  Here people work for a living   Or can’t.

People rarely guess exactly where I have painted my pictures – which is precisely the way I want it.  In this painting, as with so many others, I want a single thing to represent the many; the ordinary moment to resonate with all time; a back-porch, a stranded automobile, and some roaming clouds to define and obfuscate what it means to be alive.”

Below is an excerpt from the narrative for  “Apartment Block, Anacostia”

“Anacostia affords views of Washington for which Washingtonians pay more money than they can afford.  Its hills and valleys retain the pastoral quality for which places like Mt. Vernon are more conveniently famous.  And its history is as complicated as the Mother Ship, which seems, to an outsider, so far away.

It’s always been affordable, though Washington-style property values have been creeping past the river’s edge.  Yet once the crossing is made, square footage lacks the gamma ray quality it has in the District.  If you drive around, you’ll find a patch of land that suits your budget.  You’ll see a house that has roaring potential.  And you’ll look past the remediable decay toward a future that is – as it may not be in Mt. Vernon Square – as tangible as a rusted-out garage.  Like that garage, it’s more than all right if you care to put a roof on it and make it your own.

Washington’s working-class is that negative quantity whose history is put on hold as Big Events march pre-emptively past it.  In DC, its two-story cottages are being snapped up like nobody’s business.  Its public spaces are being widened to accommodate bigger dreams.  And its brick schoolhouses are becoming multi-family communities complete with a village green, “safer” swing-sets, and a barbecue grill.  One could argue that, in DC, the working-class might appear during the daytime, but it joins the daily exodus after its tool-kits are stowed away.

Anacostia doesn’t mind working-people and has, over the years, provided American Dream conditions for those dreamers who need to scrape the barrel now and then.  Its economy-minded architecture is not only its saving grace, it is its lifeblood.

In the picture I made, the “kick” doesn’t come so much from the architecture as its placement among those rolling hills and easement-sharing parkland.  In DC, developers sacrifice breathing-space for market-share; human amenities for monetary values.  In Anacostia, one may breathe easily enough – though it is advisable to look both ways.  And keep an eye out for trouble.

It is regrettable that racial tensions can so often define a city’s potential.

Anacostia’s potential resides in the very tensions that could tear it asunder.  Now that it is up for grabs, it’ll be interesting to see whether those tensions will gather, be diffused, or dissipate under the influence of a new order that has not materialized there or anyplace else.  In theory, the same hand that strikes someone can be offered in friendship.  Friendship, however, depends on whether the new people are willing to respect the old; what is shabby, not only about places, but human relations can be systemically eliminated and not taken away one body-part at a time.  Anacostia needs a shot in the arm, but its crowd-attracting virtues must, in the face of those very crowds, be somehow protected.”