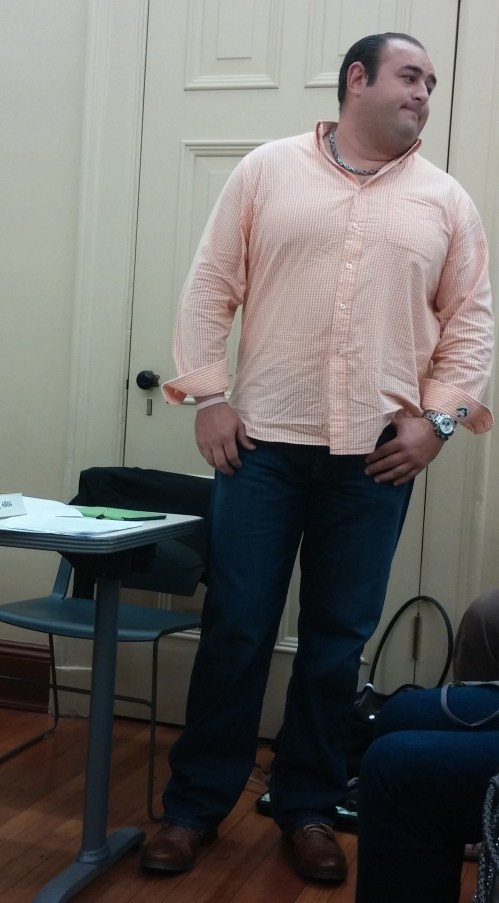 Gaynor Jablonski, Owner of the Ugly Mug, Listens to Opponents of His Plan to Double the Ugly Mug’s Seating Capacity.  Photo: Kathleen Frydl

Tuesday night, at its October meeting, ANC6B voted 6 – 0 – 2 to oppose Gaynor Jablonski’s plans to double the Ugly Mug’s seating capacity to nearly 200, expand the operation to the second floor, and add a 16X30 room with a retractable glass roof.  Nearby residents, landlords, and business owners rose to cite the Ugly Mug’s failure to live up to its Operating Agreement on trash, as well as its inability to mitigate the impact of rodents, noise, and odors with its current seating capacity of 89.

Commissioners said they had been bombarded with emails opposing the expansion, accompanied by graphic photos taken this week of rat feces, trash strewn in the rear of the restaurant, and open and overflowing dumpsters belonging to the Ugly Mug – this in the face of concerns on these very issues raised at last week’s ANC Planning and Zoning Committee.

One resident in an apartment directly across from the back of the Ugly Mug said from the first week she moved in in August she noticed that” in the evenings my apartment vibrates, the walls shake, and there is an intense low humming.…My apartment shakes so much and there is such a loud noise some evenings that it sounds like an airplane….on weekend evenings at around 1-2 a.m., I am sometimes awakened by overwhelming odors of … food.”

Diane Hoskins, representing neighbors north of Pennsylvania who support best operating practices for food and drink establishments on 7th Street near Eastern Market, urged the ANC to take a harder line with the Ugly Mug in an effort to impose best practices as standard operating procedures for both 7th Street and Barracks Row.

Jablonski had made few concessions since opposition arose at last week’s Planning and Zoning meeting.  He had agreed to close the retractable roof at 10:30pm Sunday through Thursday, at midnight on Friday and Saturday, and to cut back the occupancy slightly on the second floor.  But he’d made no progress to move in the direction of best practices on trash, noise, or odors, claiming that the cost was prohibitive.

Despite the concerns expressed by other commissioners, Commissioner Phil Peisch, in whose single member district the Ugly Mug resides, said that he could support the expansion if the owner agreed to close the retractable roof at 10:00pm Sunday through Thursday, and at 11:00pm on Friday and Saturday.  He was alone in articulating that support.

ABC Committee Chair Sara Loveland said Jablonski’s practices in managing the Ugly Mug “say you don’t care about the neighbors at all.”  She asked if he would consider expanding without the retractable roof.  Jablonski said no, that the roof was an attractive feature essential to the expansion.

Commissioner Pate cited his difficulty with the proximity of the sometimes open patio to neighbors, the lack of odor mitigation, and the graphic pictures of alley conditions behind the Ugly Mug.

Commissioner Frishberg told Jablonski that he had reached new heights of opposition – and that “doesn’t happen much.”

ANC Chair Brian Flahaven, who is normally pro-development and who said he was “inclined to try to work things out” to encourage businesses, told Jablonski he hadn’t made the case for expansion and moved to protest the application before the Alcohol Beverage Control Board on the basis of peace, order, and quiet.  The motion passed 6 – 0 – 2, with Commissioners Flahaven, Campbell, Opkins, Pate, Frishberg, and Oldenburg voting for the motion.  Commissioners Peisch and Loveland abstained.