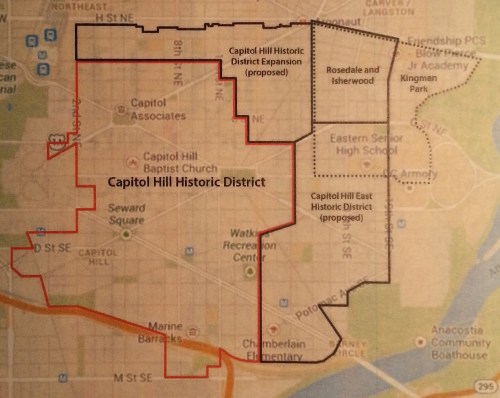 Last night at Maury School, EHT Traceries, an architectural history company hired by the Capitol Hill Restoration Society (CHRS) to study the feasibility of expanding the Capitol Hill Historic District (CHHD), presented its findings to some 60 residents who live in or around the affected area.

The firm made a series of recommendations in a 200 page report to CHRS, including expanding the current CHHD north, nearly to H Street, on the basis that buildings in those areas reflect the same architecture and style as the CHHD.   The report also recommends creation of a new “Capitol Hill East Historic District” to mark the neighborhood’s later 20th century period of development that separates it architecturally from the older CHHD to the east.

In addition, the report recommends studying properties in Rosedale and Isherwood – two areas which did not develop, according to EHT, in same way as the other historic districts did. Nonetheless EHT Traceries says there are properties here in the mixture of wooden and brick structures that deserve historic designation.

The report also recommends studying the corner stores which are rapidly disappearing from the community, wood frame structures outside Rosedale/Isherwood, and performing a reconnaissance survey on the rest of the Kingman Park neighborhood.

Based upon the data collected and reported to the public last night, Traceries has recommended expansion of the CHHD to the north and north east and the creation of a new Capitol Hill East Historic District (see illustration above).  But the cost of collecting data for the other areas and historically significant structures, as recommended by EHT Traceries, would be expensive and there was no word of funding available to pursue them at present.

The current study was funded by a settlement CHRS reached several years ago with the Louis Dreyfuss Property Group (some $83,000), as mitigation for the demolition of twelve historic buildings in the way of the new Dreyfuss development between H and G and 2nd and 3rd Streets, NE.  Last night, a Traceries representative said the firm would have liked to have studied the area all the way to Florida Avenue, “but there wasn’t the funding.”  For more on CHRS’ efforts to expand the CHHD, see here http://bit.ly/1oovsau and here http://bit.ly/1y9ymQf

The Historic Preservation Office (HPO) representative in attendance last night, Kim Williams, noted the benefits of historic district designation, which include protection of buildings from demolition and inappropriate alteration.  In addition, she said, “the coherent narrative of neighborhoods” is preserved and “its character is maintained in perpetuity.”

The negatives associated with historic district designation, raised in some questions last night, were also alluded to in a list of FAQs distributed by HPO, regarding the length of time it takes for getting a permit for home improvement.  The memo notes that review for major home improvement projects by HPRB – which meets twice a month – is required (the memo fails to mention the additional approval by the ANC which most applicants will want to have before going to HPRB).  In addition, there are restrictions on alterations to the façade of a house, a virtual prohibition on adding floors or any addition which can be seen from public space, HPRB review of hardscaping (walks, driveways, retaining wall, etc.), and restrictions on use of materials to repair or renovate, including windows and front yard fencing.

EHT Traceries is scheduled to make two addition presentations on the study: