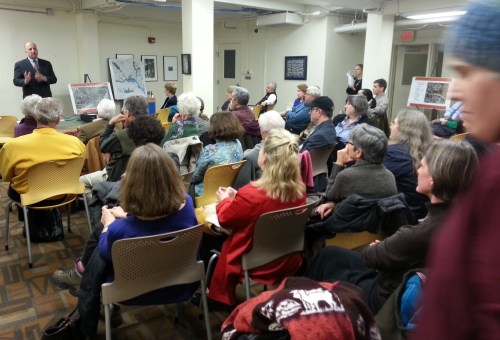 Last night, at a second “scoping meeting” at Southeast Library, the National Park Service (NPS) tried to assure neighbors of Marion “Turtle” Park that siting a memorial to Francis Marion (the “Swamp Fox”) in their neighborhood park was not a done deal; that the park is not (yet) “the preferred site for a memorial.”  But many of the 40 or so residents greeted this assurance with skepticism, noting a National Capital Planning Commission’s staff report that promotes Marion Park as a proposed site for the memorial and which disregards neighborhood opposition to a statue situated in the center of the park.

Given the track record of both local and federal government agencies in dealing with District residents, that skepticism appears justified.  As was pointedly noted by residents last night, without voting representation in Congress, DC residents lack the mechanisms to exert any influence over the National Park Service, a federal entity.  At the same time, neighbors of the park noted that the green space was a much-loved “backyard” to them, a place to walk dogs, let children play, and build the ties that strengthen and define our community.

The acrimony of the meeting culminated in a series of questions posed by resident Randy Steers, who accused Park officials of being “disingenuous” in claiming that Marion Park is not the “preferred site.”   NPS official Peter May objected, saying he would not stand for being called a liar, and that there was no preferred site until the end of the process.  Nonetheless, the recommendations from commissions responsible for weighing in on the matter are piling up, and there appears to be no support from formally designated stakeholders for siting the memorial elsewhere.

Some residents perceived disingenuousness from the meeting’s beginning, when project sponsor John McCabe’s gave a selective historical account of Francis Marion, who he called South Carolina’s “favorite son,” and listed a command of what he called the “first integrated fighting force” in US history as among Marion’s achievements.  Resident Kathleen Frydl later challenged that assertion, saying Francis had commanded his slaves into battle, and noted integration on the battlefield was achieved only during the Korean War, and in the face of opposition from states like South Carolina.

In the main, residents near the park spoke passionately of their feelings for the park as a community gathering place for neighbors and their children, one saying that “It’s alive – an integral part of the community – and any memorial needs to value the park’s uses.”  Several residents urged consideration of a historical memorial other than a statue – which one resident said would obstruct normal uses of the park and portray Marion’s complicated historical legacy as a story that underestimates the public’s ability to assimilate and accept the flaws of founding fathers as part of their commemoration.  On this point, Frydl raised the question of why the NPS has not designated the church designed by local figure Calvin T.S. Brent, located across the park and built by freed slaves, as one of the several historical markers with which a memorial to Marion must coexist.  No answer was provided, but May did acknowledge that this question has come up before.

The inability of local residents to influence meaningfully the siting of the memorial and the inability of DC residents to prod the NPS to construct a memorial that interacts respectfully with DC history is well summarized in the teaser to The WaPo Express article from yesterday: “Don’t Want a Federal Monument in your Park?  Tough Luck,” see :  http://wapo.st/1rZIWWx