The Week Ahead….And a Look Back 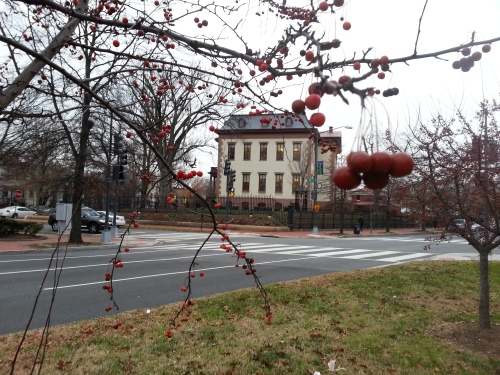 East side of Hill Center, from the Pennsylvania Avenue median

The Week Ahead….And a Look Back

Last Tuesday, ANC6B met for the last time in this two year term.  Six of the ten current commissioners did not seek re-election and one resigned.  It will next convene on January 13, 2015, in Hill Center with the three returning and seven newly elected members. Pictured below is the current commission in its last meeting.

At its last meeting on Tuesday, ANC6B voted 6-3 to in favor of an Office of Planning proposal to limit the matter-of-right height for townhouses in residential zones from 40 feet to 35 feet.  The OP will consider the proposal next year, taking into account the opinion of the ANCs.  The current 40 foot height limit would still be allowed under a special exception if certain criteria are met, as follows:  The applicant shall demonstrate the overall building height will not have a substantially adverse effect on the use or enjoyment of any abutting or adjacent dwelling or property, particularly regarding light and air, privacy of use and enjoyment of neighboring properties, and that the resulting building or structure height, as viewed from the street, alley and other public way, shall not substantially visually intrude upon the character, scale and pattern of houses along the subject street frontage.

Commissioners Flahaven, Campbell, Frishberg, Pate, Oldenburg and Jayaraman voted for the limit, citing opposition to the increasingly frequent pop ups on Capitol Hill.  Asked why they voted against the measure, the three commissioners who voted in opposition provided the following:

Sara Loveland:  “I support increased density for my SMD and many r-4 zones around the city that have similarly awesome transportation networks.  Modest pop ups are one great way to add it and either allow families to grow in their homes or provide some of the smaller unit sizes and workforce housing we are particularly lacking in this neighborhood.  I don’t see the need to make home owners jump through hoops for that extra five feet.  Arguments required to request a special exception to build to 40′ under the new code would require highly subjective interpretation. Design is key but the ANC isn’t a design committee.  I think decreasing the height limit might also actually exacerbate undesirable design when combined with space constraints of small lots.  Facade and street view are covered in Historic districts and we do need the city beyond those to evolve.”

Phil Peisch:  “I do not think the “pop-up” problem warrants decreasing the by-right height limit across the entire R-4 district.  The proposal is overbroad and will have unintended consequences.  It will require special exceptions for far more than just pop-ups and there is a real cost to that.  In addition, I think the test proposed for the special exception is extraordinarily subjective.  As a result, it is impossible to tell exactly what will and will not be prohibited.  There is some subjectivity in many zoning inquiries, but the level of subjectivity proposed here is unprecedented (in my experience) on the zoning side (more akin to a historic review analysis).”

Nichole Opkins:  “I felt that the proposed language was overbroad.”

On Wednesday, December 3, The National Capital Planning Commission supported locating the proposed memorial to Francis Marion in Marion Park. In its comments the Commission recommended that if the sponsor chooses Marion Park as the preferred site they should develop design concepts that protect open space and public uses in the park.

The Marion Park site is the only one of the five sites under jurisdiction of the NPS – the other alternative sites belong to the District.  Given the strong feelings about Marion’s background, it seems unlikely the District would cooperate with the federal government to make any of the sites under its control available for the memorial, thus increasing the likelihood that Marion Park will become the statue’s destination.

Excerpts from the NCPC PROJECT SUMMARY

The National Park Service, on behalf of the Marion Park Project, submitted the Marion Memorial Site Selection Overview, a preliminary study of six potential sites, to the National Capital Planning Commission for review and comment. The Site Study alternatives include:

The Commission is not formally approving a site at this time. Moving forward, the memorial sponsor will take NCPC’s comments into account as it identifies a preferred site and develops design concepts.

Through the gate of Congressional Cemetery.  Straight ahead to the chapel and turn left.  Take the next right.  The grave site is on the right hand side, half way down.

The second leaf pickup period starts today and runs through the 27th.  Leaves should be piled in tree boxes for removal.

Update from DC Streetcar officials regarding the final stages of the project and commencement of revenue service.

Discussion of request by 1101 Convenience Mart for an exemption from the Ward 6 Singles Ban.

ANC 6B Executive Committee Meets at 6:30pm in Hill Center to set the agenda for the January 13, 2015, meeting.

ANC6B passed a resolution last Tuesday requesting the City Council to not the merger without assurances that the merger will enhance availability of local, clean, affordable, reliable electricity for all customers in DC.  The vote was 6-0 with 3 abstentions.

2 responses to “The Week Ahead….And a Look Back”