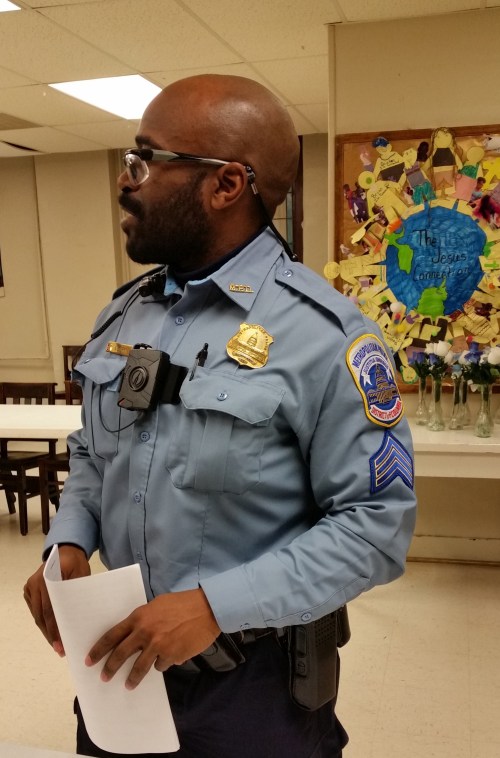 Sergeant Curry, MPD District One, Wears One of the 160 Body Cameras Being Tested in the City

Six of us showed up for the PSA (Police Service Area) 108 meeting at Liberty Baptist Church last Thursday night: ANC6B Commissioner Brian Flahaven, four residents and a journalist.  MPD First District’s Lt. Dykes is the designated PSA Lieutenant for PSA 108, but since he works a later shift, the meeting was conducted by Sergeants Curry and Thompson.  Curry remarked on the attendance, noting that only one person had shown up for the last meeting.

In the course of the discussion on what is happening in PSA 108, Curry mentioned that in contrast to cases where an officer is given evidence that a felony has been committed, arrests and citations for some misdemeanors – including disorderly conduct – must be witnessed by an officer before the officer can take action.  According to Curry, not even photographic evidence provided to an officer is sufficient.  Curry said that the DC Code lists 27 misdemeanors, some of which require that a police officer witness the act before taking action, and some not.  Pressed as to which needed to be witnessed and which do not, Curry referred the questioner to the DC Code.

Also of note, residents may not be aware that body cameras are being used in ANC6B, and Sergeant Curry was wearing one.  On October 1, some 160 MPD volunteers (master control officers and sergeants) from all seven police districts began a six month pilot program using five models from seven vendors.  Cameras being used include those that mount to an officer’s collar, shirt front, or eyeglass frame.  They can be turned on at the officers’ discretion but under departmental policy, cameras are required to be turned on when an officer receives a call for service or assistance and must remain on until the call is finished.

In the interest of promoting a closer working relationship with the MPD, Flahaven said that ANC6B commissioners have talked about asking MPD officials to interact with the ANC on a regular basis on policing in ANC6B, and speculated that could happen this year.  The city has seven police districts, each divided into Police Service Areas.  Capitol Hill’s First District has 8 PSAs.  See here:  http://1.usa.gov/1J3W2Kp

A useful website that is underpublicized at the PSA 108 and PSA 107 meetings this reporter has attended is the DC Police Crime Mapping website:  http://crimemap.dc.gov/

For example, in a few key strokes you can find details on the type and location of each of the 34 crimes reported within 1000 feet of Eastern Market Metro (or any other address) in the last 30 days.  Go here:  http://crimemap.dc.gov/Report.aspx