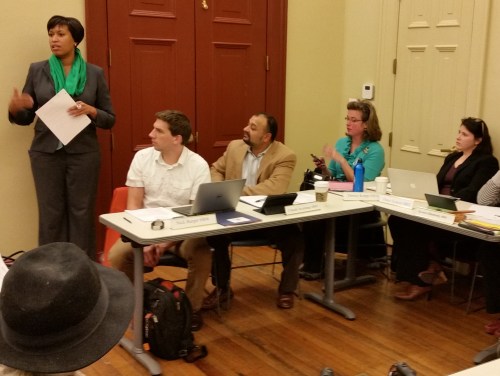 Mayor Bowser made a courtesy call on ACN6B Tuesday night to comment on her appointments and priorities.

When the Q&A began, the first question came from Marci Hilt, representing those Capitol Hill residents who have consistently shown the greatest concern regarding the Hine project.

Hilt referred to a previous public statement by Bowser during an Economic Development Committee hearing when Bowser said that Hine “should not have happened the way it did.”  Hilt said that “We now have proof” that EastBanc does not qualify for LIHTC funding for the affordable housing included in the Hine project.  She told Bowser, “You have stopped the Franklin School (another EastBanc project). “The Hine development stinks,” she said, “and you still have the power to stop it.”

Bowser said that she was concerned about how to better integrate the affordable housing into the project, but noted that she had also said, “This project is so far along it’s difficult to restart it.  It’s been through the PUD process and [the] courts,” adding, “My view is to move ahead.”

On Commissioner Brian Flahaven’s question on how she planned to address the issue of the homeless shelter at DC General, she said it was her view that it should be closed, that “It is too big to be used as an emergency shelter.” She said she has tasked the new head of Department of Human Services Laura Green Zeilinger with closing DC General and dealing with long term issues leading to homelessness.

On Commissioner Daniel Chao’s question about the quality of life issues at Potomac Gardens, Bowser said that the DC Housing Authority has done a walk-through, and though Potomac Gardens ”is not scheduled for a vast make over” she acknowledged that her administration needs to insure regular renovation.

The Mayor also said that the success of the initial Donatelli-Blue Skye mixed use project on Reservation 13 will determine the future of the Reservation.  She said she would look to Councilmember Allen for recommendations on providing support for middle schools, stated that it is important to get the street project car project done well and had ordered a review of the street car project – and that the cars would not begin running until after the system’s safety is assured.  Bowser also accepted Commissioner Denise Krepp’s invitation to attend the opening of the new CAG building on 15th street “when the building is completed at the end of this year.”