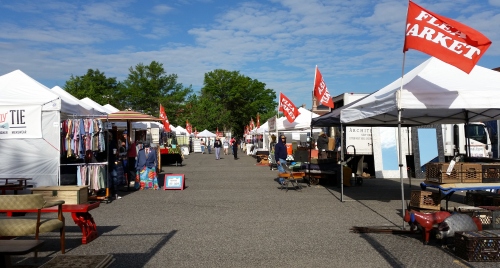 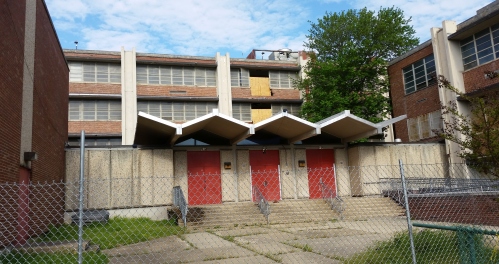 Demolition of Hine Buildings Will Begin With Those Facing 8th Street, SE

Community Meeting on Monday, May 4, Will Provide Details on Flea Markets and Hine Construction

Visitors to the Saturday Flea Market on the Hine Parking lot today will get a preview of what to expect as the flea market downsizes in preparation for its move to 7th Street starting May 16.

Saturday Flea Market operator Carol Wright says when the market moves to 7th Street between Pennsylvania Avenue and C Street, SE, on Saturday, May 16, the number of available vendor spaces will shrink from 155 – used by vendors allocated up to three spaces each for tents and parking to a much smaller number of 34 spaces for tents.

Wright says she will lose some vendors to other venues such as the Georgetown flea market.  She will allocate some spaces on 7th Street on a regular basis to those vendors who have been with her longest.  Since demand for the remaining spaces exceeds supply Wright says she will allocate spaces to other vendors on alternate weekends to accommodate as many as possible.  Once on 7th Street, Vendors will be confined to one side of the 35 foot wide street, since the city will require a 20 foot fire lane to be kept clear of vending spaces.   After an initial six week transition period while the Hine building is demolished, vendors will pay for parking in nearby lots.

Deciding which vendors to accommodate in the downsizing has been a wrenching experience, Wright says, and neither she nor her vendors are certain how successful the new arrangement will be.  According to Wright, fewer vendors will attract fewer customers while less space for each vendor will mean fewer choices for those customers.

Clark Construction is scheduled to finish hazmat removal by May 16 – when that happens the Hine lot will close in order to permit demolition to begin.  Demolition could start as soon as May 18, and will start with the Hine buildings facing 8th Street. Demolition is expected to take about six weeks.

Community Meeting on Monday, May 4 at 5:30pm in the North Hall of Eastern Market

Barry Margeson, Eastern Market Manager, (who will oversee the 7th Street  flea Market operations on behalf of the Department of General Services)will provide an update on the transition of the flea markets to their new location as well as provide updates on traffic flow and parking changes.