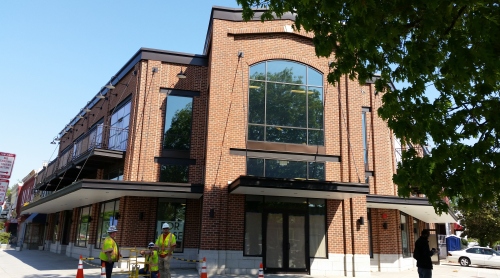 According to the Douglas Development website for the mixed use retail/office building at 1442 Pennsylvania Avenue, SE, two tenants – McCormick Paints and New York Pizza – have been signed to occupy the first floor retail space.  The site was acquired by Douglas in 2007 and the redevelopment was completed in December, 2013.  The website says the two story project has 13,139 square feet with abundant space for outdoor seating and the potential for a rooftop terrace.  Offices are planned for the projects second floor.  To see the project’s website, go here:  http://bit.ly/1K7X8pT

The majority of the first floor retail space will be occupied by McCormick Paints.  This will be the third paint store in SE Capitol Hill which already has Frager’s Paint Store at 12th and Pennsylvania Avenue, and Duron Paints on Barracks Row.  It appears that McCormick’s will be the largest of the three.  NY Pizza is looking for a new home since the current site at 1401 Pennsylvania Avenue is scheduled to be redeveloped by CAS Riegler who plans to put a six story 150 – 180 residential building on the site.  For a previous post on this development, go here:  http://bit.ly/1F6lYGl