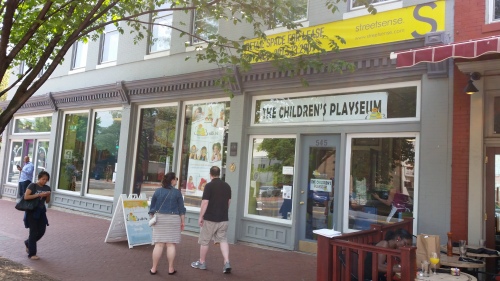 Barring “a miracle,” Gina Seebachan, owner and founder of the Children’s Playseum 545 8th Street on Barracks Row, says her Capitol Hill location will be forced to close at the end of May.  The Playseum is a children’s play venue – not a day care center – where a child and parent or caregiver can come – and for $7 each, stay as long as they want.  The space provides a series of play rooms, e.g., “Eastern Market,” a child sized kitchen and dining room, a pet shop, etc.

It’s unclear what will become of the space being vacated.  Though zoned for retail, the location has no liquor license that would facilitate location of a new restaurant at that location.  In addition, city regulations may limit additional restaurants on that block.  Many nearby residents who believe there are already enough restaurants on Barracks Row have been active in requiring new restaurants to adhere to best operating procedures which will make it difficult for all but the most committed to pursue opening a new eating/drinking establishment on Barracks Row.

Seebachan says a series unexpected business expenses and limited operating hours occasioned by building modifications in preparation for the opening of DCanter in the same building resulted in a loss of revenue from which she has not been able to recover.

Update:  DCantor’s owner, who sought and was offered the opportunity to comment subsequent to publication of this posting, sent CHC the following:  “Prior to opening, DCanter renovated the section of the building that it now occupies in accordance with the building and fire codes of the District of Columbia. DCanter neither renovated nor requested renovations from any other neighboring businesses. Any and all renovations that occurred in other building units in order to place them in compliance with fire codes required by the District of Columbia would have been initiated by either the building owner or other building tenants. DCanter was not party to discussions that involved renovations in any other parts of the building.”

Editor’s note:  In many jurisdictions, city regulations require the upgrading to code of the entire building if part of the building is upgraded.

She does not begrudge the landlord, Paul Lucas, who she says has been generous.  Earlier this year, she agreed that if she could not catch up the five months of rent in arrears by the end of March, she would vacate.  Seebachan was successful in getting a loan to cover the rents, but now finds herself unable to pay the rent for May – traditionally her slowest month – and says she will have to leave May 30.  She credits Lucas with giving her a chance, and says, “Business is business, and I can’t pay the rent on time.”

She is looking for a new location on Capitol Hill, and says, “Sometimes it’s just a matter of finding somebody who cares.” Anyone with information regarding a new location can call her at 240-507-8965.  In the meantime, Seebachan is asking residents to continue supporting the DC Playseum on 8th Street for the rest of May.  She says that the Bethesda location will continue to operate and that she has three more years on the lease on that space.  For DC Playseum website, go here:  http://playseum.com/