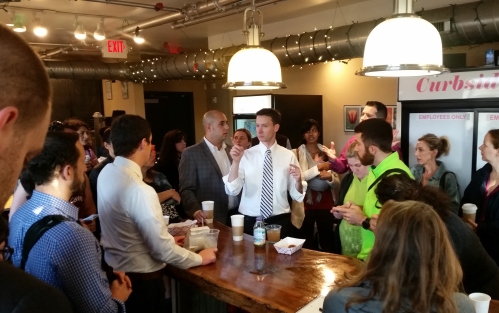 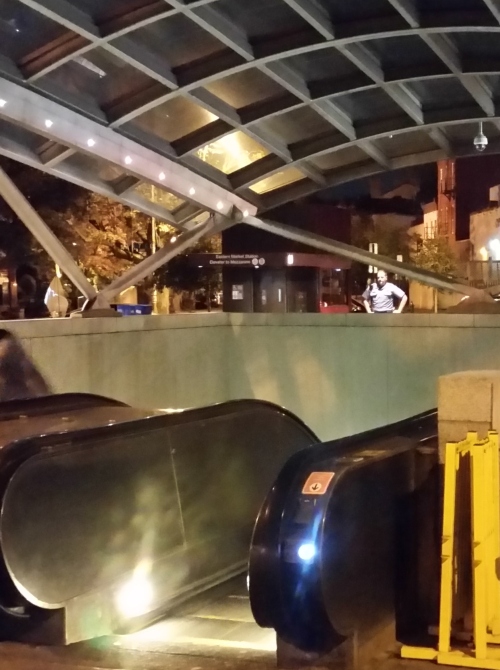 This morning, Charles Allen met for more than two hours with 50 plus Hill East residents who came to Curbside Café at 15th and C Streets, SE, to express concern about the continuing violent crime – mostly robberies, many of them with a gun – on Capitol Hill.  Allen asked 1st District Commander Jeff Brown and 1 District MPD Lt. Eddie Fowler to attend and Brown gave an update on MPD’s efforts to address crime.

(Shortly after the meeting, about 10:20am, MPD responded to a shooting at 1300 Pennsylvania Avenue, SE.  The victim sustained a gunshot wound to the leg and was transported to the hospital in a private vehicle.  Police say that the shooting may have been the result of a traffic altercation between the victim and the suspect at the Sunoco Gas Station.)

Brown told the crowd that Chief Lanier had summoned him yesterday and said, “Here’s the keys – you’re driving.  I want to know what’s going on on Capitol Hill.”  Brown said that he and the Chief drove Capitol Hill for three hours, touring hotspots – H Street, Hill East, and Barracks Row.  Brown told the Chief that his force was stretched too thin.  At the end of the tour, the Chief authorized overtime for officers of the 1st District, said she would shift some additional resources to Capitol Hill and suggested that bike officers be encouraged to use the overtime to increase their presence on the streets.

Brown also told the crowd that a string of robberies such as Capitol Hill has experienced recently is usually caused by one or two groups of individuals, and that work from the MPD Intelligence Unit had paid off yesterday when 1st District officers pursued a group of five robbery suspects into the 6th District where they were arrested.   He also said that one of the two suspects involved in the mid-day armed robbery at 9th and East Capitol had been arrested in the 6th District.  According to Brown, 90% of the violent crime in the 1st District is being committed by individuals from outside the community.

Brown noted that though the force has an authorized level of 4200 officers, the current level is 3800 – down 400 officers.  There are 170 cadets in the academy, but it will be a year before they are on the streets.  Recruitment is problematic:  only 1 out of every 300 applicants is selected to join the force and many officers who join the force are recruited away by other police forces offering better pay and/or benefits.  In addition, he said, the force is facing the crisis of a “retirement bubble” with many officials and officers becoming eligible for retirement simultaneously.

Prior to Brown’s arrival at the meeting, Allen told attendees that MPD was failing to communicate to the community the measures they were taking to address crime.  He said, “You say your adding overtime, new officers, and new bike units, but I’m not seeing it and I’m not feeling it.”  He urged MPD to experience the community in a different way by getting officers out of the cruisers and into the neighborhoods.  He said he was also working on a package of legislative initiatives with CM McDuffie, Chair of the City Council’s Committee on the Judiciary.  Some of the elements under consideration include incentives for home crime cameras, more funding for recreation centers, more funding for street lighting, a stricter pre-trail hold policy, and reforming the 911 Call Center.

Hill East activist Jim Meyers told Brown that he was “horrified” at the demise of the PSAs, saying that when police had failed to show up for a recent PSA 108 meeting, the attendees engaged in a discussion of how to collectively address crime issues on their own, and it was “one of the best PSA’s” he’d attended in years.  He asked Brown, “Is community policing dead?”

Brown said that community policing is not dead and stressed the importance of revitalizing the PSAs and involving the ANCs.  He said that the PSAs which should be one of the main ways the MPD gets information out to the community.

Allen announced that he will host a Community Safety Meeting with Chief Lanier next Tuesday, October 27, from 7:00pm until 8:30pm, at Friendship Chamberlain Charter School, 1345 Potomac Avenue, across from Harris Teeter. 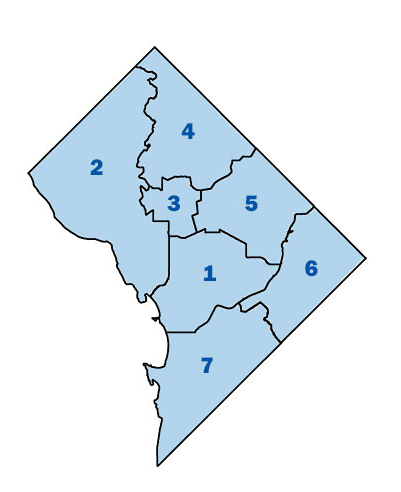 The 6th District lies across the Anacostia River. Councilmember Charles Allens Ward Six contains all of the 1st MPD District and parts of MPD Districts 3 and 5. 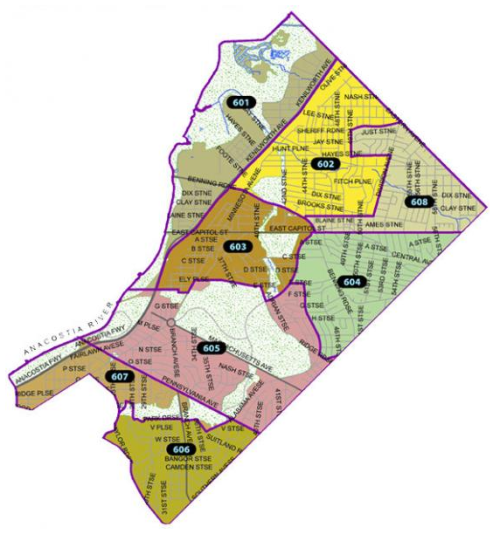