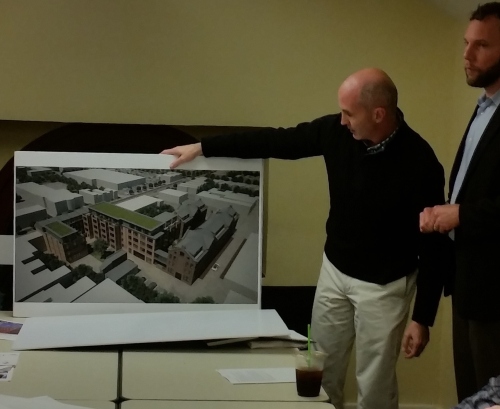 Sean Ruppert of Opal LLC, holds depiction of aerial view of Watkins Alley looking Northeast. The large white structure at the top of the rendering is Safeway with E Street running between it and the project.  Frager’s is hidden by the tallest structure with the green roof.

Rendering of the view from E Street. The pass through permits resident and public access to the “North Courtyard.” Just visible through the opening is the single carriage house in the project – which Ruppert says zoning officials referred to as the “jewel” of the project. In order to provide the pass through, designers had to eliminate one unit. 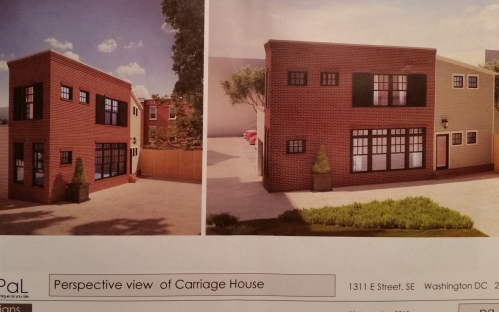 The Carriage House represented by the tall narrow  grey rectangle just below the center in the first photo above. 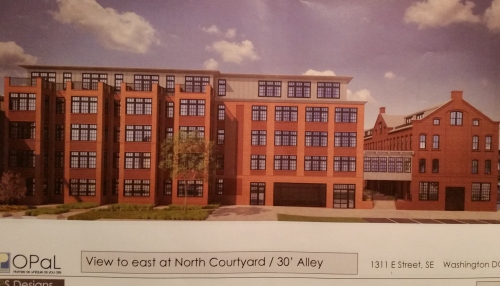 View looking north from the North Courtyard near the carriage house. The bridge between the buildings will span the southern end of the “Southern Courtyard” depicted below.

View looking west through the “Southern Courtyard.” Residents and public will have access from the entrance opening onto the the narrow alley that bisects the block north to south.

View of Watkins Alley looking north west, showing the entrance to the “Southern Courtyard.” The rendering does not show the parking lot for Signature Collision Center which would be on the right of the image. That parcel is scheduled for development of residential units by Insight Development, who is also developing Buchanan School across the street.

Monday night, ANC6B’s PUD Subcommittee heard a presentation on the latest plans for the 43 residential unit project planned for 1311 E Street, SE, near the SE Capitol Hill Safeway.  Developer Sean Ruppert of Opal LLC told the Subcommittee that the project goes before the Zoning Commission next April for zoning relief to permit greater height and density than zoning currently allows.  He subsequently told CHC he hopes to break ground in the spring of 2017.  Plans for the project were reported first by CHC last January See here:  http://bit.ly/14qcnLZ

In return for increased height and density, zoning regulations provide that the community receives compensatory “benefits and amenities” and the PUD Subcommittee chaired by Commissioner Nick Burger is considering a list compiled after consultation with members of the community in subcommittee meetings in recent months.  Some of the items on the list include increased affordable housing, improvements to Potomac Avenue Metro Plaza, greenspace improvements, tree canopy improvements, modification of the fence around Potomac Gardens in accordance with Potomac Garden resident wishes, and improvements to Hopkins and Chamberlain School playgrounds.

There are three projects in close proximity seeking zoning relief and community compensation packages will be negotiated with each one by ANC6B on behalf of the community.  See here:  http://bit.ly/1Ste9jt

The three projects, the developers, and the number of likely residents are as follows: