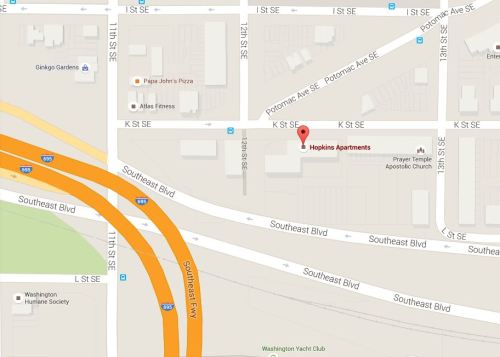 Tuesday night, Leon Kafele, Chairman/CEO of ICP Group – the major force behind development of Potomac Parc on lower Barracks Row – floated his proposal for rehabilitation and redevelopment of Potomac Gardens and Hopkins Apartments before ANC6B.  Kafele says the current 363 residential units could be expanded into as many as 1200 affordable units, thus contributing to the solution for the District’s affordable housing crisis.

Kafele’s plan would initially involve building a new affordable housing complex near 1229 K Street, currently occupied by elderly low to moderate income residents, move those residents into the new building, and then rehab the existing structure for new tenants.  The process would proceed, building by building, across the Potomac Gardens and Hopkins campuses.  Kafele says his company has been working for a year or two talking to residents in 1229 G Street, and gathering their signatures on a petition endorsing the move.  Most residents, he says, have signed the petition.   Kafele thinks the project will cost up to $250 million and take only six years – building with precast concrete.

The ICP Group website envisions the privatization of the project, and states:  “Our vision for Potomac Gardens is to create a mixed-use development that will include a combination of apartments, retail space, and parking….The bottom floor will consist of approximately 90,000 square feet of retail space.  The type of proposed retailers includes restaurants, coffee shop, local market, copy center, fitness center and clothing stores.”

Kafele said he expects to come back to Hill Center in January and conduct a more in-depth briefing for the community.  For more information, see the company’s website, here:  http://bit.ly/1R8YuHV