“Tree Mansion” Has Archibald Walk Residents Up in Arms 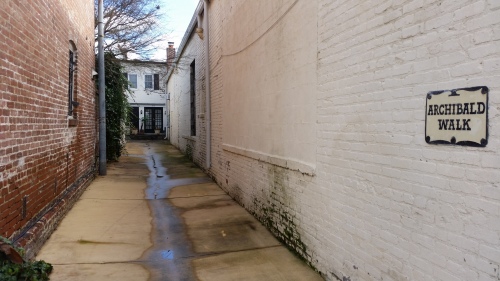 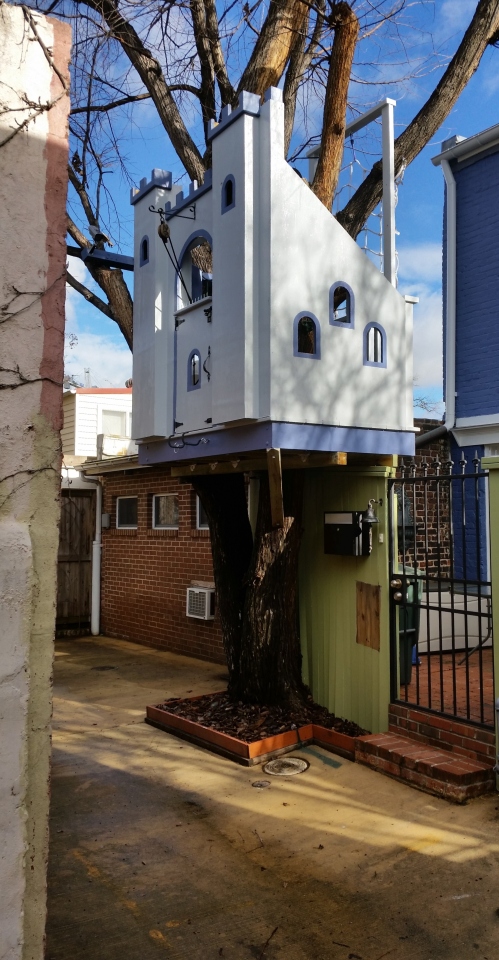 A left turn at the end brings the “tree mansion” into view. 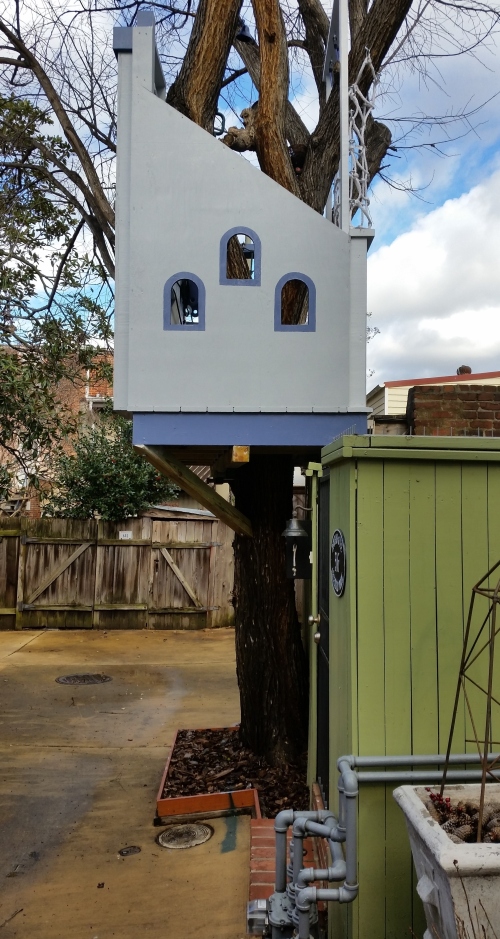 The green line on the ground is where DDOT says the owners’ property line ends. 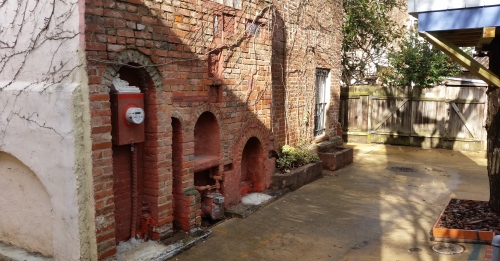 To put the structure in context, the tree house overhangs the portion of the alley seen here

“Tree Mansion” Has Archibald Walk Residents Up in Arms

Lax enforcement of public space regulations by DDOT appears to be the culprit at the heart of the squabble which has the residents of Archibald Walk up in arms over what one observer called a “tree mansion” which extends over the alley.  Those angry neighbors are unanimous in claiming the structure has a negative impact on their quality of life.

In brief, the owners of one of the homes on the narrow, U-shaped pedestrian residential alley in the center of the block bounded by G and E Streets and 6th and 7th Streets, SE, undertook the construction of a large tree house for their children.  After being told by the Department of Regulatory Affairs that no permit was necessary, the owners proceeded with construction, until receiving a stop work order issued by DDOT, apparently because of the public space issue.  Despite the demonstrable projection of the tree house some two feet into public space over the alley, and for reasons that are unclear, DDOT subsequently issued a ten day permit for the construction of a “balcony” and the owners completed construction.

Although the structure is within the Capitol Hill Historic District, since no DCRA permit is required, there is no historical preservation review of the structure.  Still nearby Barracks Row Heritage Trail signage speaks to the historical character of the alley: “In 1897 the alley had 22 tiny dwellings sheltering well over 100 people. Today six remain….The six survivors are now prized residences along Archibald Walk, named for long-time Capitol Hill resident Archibald Donohoe.” See here:  http://bit.ly/1Se698w

One of the owners of the tree house told the Committee that neighbors’ objections to the treehouse are retaliatory, based of actions of children in Archibald Walk who damaged their potted plants “illegally placed in public space”  and because “they don’t like kids.”

Neighbors say DDOT ignored DC regulations prohibiting balconies from projecting over alleys, and are asking ANC6B to deny the applicant’s request for retroactive approval of the DDOT permit which residents uncovered through a Freedom of Information Act request.  They note that the extension over the alley into public space which DDOT sanctioned requires a variance which would have brought the matter before the ANC for consideration.  Neighbors also point to the precedent-setting nature of the permit asking, “Do we want tree houses protruding into public spaces all over Capitol Hill?” There are no letters from immediate neighbors which support the treehouse and five strongly-worded letters in opposition.

ANC6B Commissioner James Loots (in whose single member district the project lies) told the applicant, “If the permit for use of public space is not granted [the applicant] will have to remove the treehouse.  I 100% disagree with the characterization of the applicant that the neighbors’ complaints are retaliatory. The question is, is this appropriate use of public space?”

In the end, the Committee voted to recommend to the full ANC that DDOT deny the public space permit that would allow the tree house to extend into public space.  The vote was 7 ayes, 2 nays, and 2 abstentions.  Planning and Zoning Chair Nick Burger and Commissioner Kirsten Oldenburg voted against the recommendation.

In an email to Archibald Walk residents last month, Loots said: “We were successful in getting DDOT’s Public Space Committee to hear this as a formal matter rather than just approve the requested permit administratively, which is why ANC6B will get to formally weigh in on the case when it is heard by DDOT.  Because ordinary procedures do not appear to have been followed in this matter, it was not properly noticed or timely ….”  Loots went on to say that he had been told informally that the permit may be heard at the Public Space Committee Hearing on January 28.

The full ANC6B will consider the recommendation of the Planning and Zoning Committee when it meets next Tuesday, January 12, at 7:00pm in Hill Center.