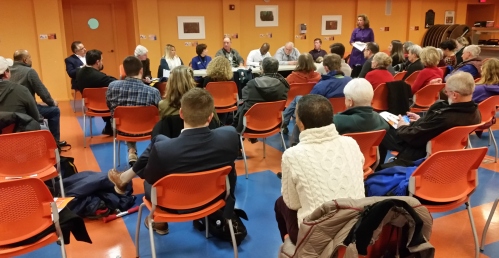 Some 35 residents turned out for a meet with 8 7-Eleven executives last night. Co-organizer ANC Commissioner Krepp stands at upper right. 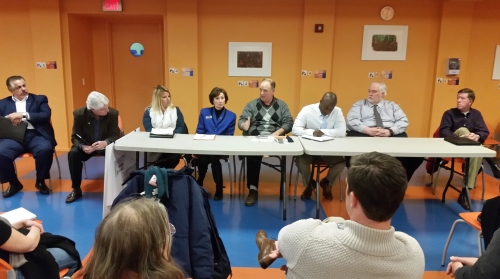 After 7-Eleven initially declined to attend a previous community meeting, they turned out in force after a letter from ANC Commissioners Krepp and Jayaraman strongly urged their participation. 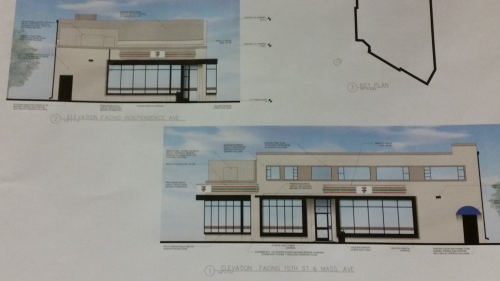 Last night, at a community meeting organized by ANC6B Commissioners Denise Krepp and Chander Jayaraman, eight 7-Eleven executives listened as some 35 neighbors expressed their concerns about the proposed 24 hour 7-Eleven on 15th Street, between Massachusetts and Independence Avenues.  (For map and related story see here:  http://bit.ly/1IWbKxj)

Residents sought assurances that the proposed 7-Eleven would not resemble the 7-Eleven on Barracks Row, with its violence, panhandling, loitering, drug deals, and flash robberies.  Krepp said, “We … are asking you to take the necessary steps to assure that were not going to live with what is happening on Barracks Row.”

Though 7-11 is moving into the 15th street location by right, individual residents nevertheless rose to state their opposition to the proposed location.  They pointed to the area’s history of criminal activity, which has improved over the years with gentrification, and they fear backsliding when the outlet opens.  A resident said that having a store open 24-7 “means putting us at risk” since the store “will attract foot traffic moving north from the Potomac Avenue Metro stop” as well as customers and clients from drug treatment clinics at DC General and clients from two nearby mental health clinics.  Another said, “You’re going to bring people in. We’re already scared at night. Crime is increasing. There is a potential assault issue in the neighborhood. What if it’s my daughter, what if it’s my son, what if it’s me?”  In addition, concerns were expressed about traffic, parking, and littering.  Dog owners cited example after example of having to protect their animals from discarded chicken bones in parks all over the Hill from 7-Eleven’s bestselling chicken wings.  There was strong pressure from the community for 7-Eleven to hire a security guard for the location.

In response to community concerns, the 7-Eleven reps said that the proposed 7-Eleven will not sell beer or wine, and cited the company’s proactive outreach to MPD for assistance on controlling panhandling and said they would install no loitering signs. (DC has no law prohibiting loitering, a result of the repeal of the “move along” laws of the 60s, which were deemed unconstitutional.)  They will provide three surveillance cameras for the exterior of the building and ample lighting.  7-Eleven further expressed a willingness to consider installing planters to establish a boundary in front of the store.  These promises were tempered by the executives’ apparent acceptance of the conditions at the 7-Eleven on Barracks Row, despite their assurances that they make weekly rounds to check on all stores.

Representatives said that security guards are not an effective tool to deal with flash robberies because even MPD “throws up their hands and say they don’t know how to deal with them.”  They said regarding hold ups that they believe their nationally known Loss Prevention and Safety Program – developed after talking to professional criminals – is more effective than hiring security guards.

Another bone of contention at the meeting was the proposed 24-hour operation of the new store.  7-Eleven justified the hours, not for the money that is made overnight, but as a branding technique whereby customers are always certain that a store will always be open.  Reps noted that it is an essential part of their business model, and further, without a 24 operation, the building will be dark and vulnerable to burglary. Executives mentioned their willingness to participate in community clean-ups and to consider adopting a park.  They also mentioned that, to date, they have not located a franchisee for the new store.  In the event that the store opens without a franchisee it is run by the corporation.

ANC Commissioner Jayaraman cited the 7-Eleven’s on Barracks Row and at 8th and Maryland Avenue, and said he was “pretty sure” that the measures that 7-Eleven claims to be taking were not working at those stores, and urged the representatives to look at those locations.  Jayaraman urged 7-Eleven not to depend on the assurances from MPD to assuage community concerns. He said with a 300 to 400 officer shortage, MPD was never going to devote significant resources to the store.

A representative told the residents, “Our take away is that we will take all these examples and figure out what we have to do to do better.  We can assure that we will do everything to make this store a beacon in the night, not a problem in the night.”  The reps discounted the value of a security guard, saying, “But a security guard is not the answer. Trust our judgment – there is a better way. We’ve got hard work to do.  I promise you that’s what we will do.”

That pledge was received with some skepticism.  One resident pointed out that the company was assuring that it could do at that the proposed location what it has failed to do at a much more controlled location on Barracks Row – which is nearly across the street from a fire station.  She cited the panhandling, the presence of the homeless, and the “filthy sidewalk” and trash which litters the area (including the once attractive side garden) around the store.  “Why haven’t you fixed it?” she said.   The representative in charge of the store assured that he will work with the franchisee going forward.

Krepp summed up, citing the main concerns of the community:  loitering, pan handling, security, loading hours, lighting, signage, hours – and chicken bones.  She warned that the representatives, “You can’t anticipate what’s going to happen” when schools let out in the afternoon and thousands of students pour into the community.  “You need to be ready,” she said. 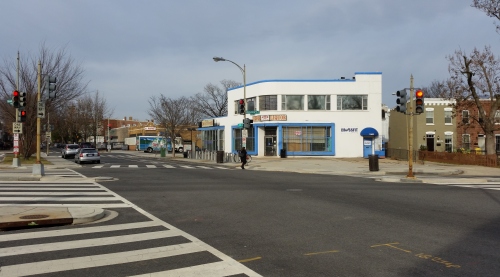 View of the site looking Northeast 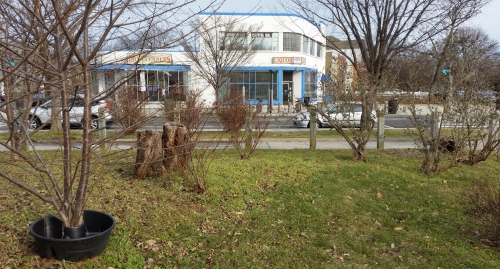 Residents fear proximity to nearby green space will encourage loitering. 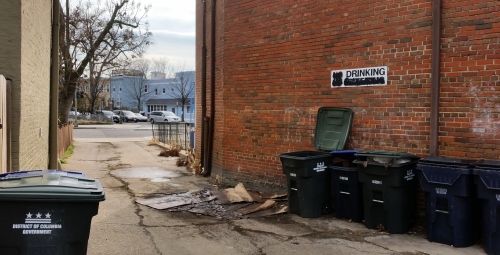 An alley running behind the proposed store opens onto Massachusetts Avenue on one end…. 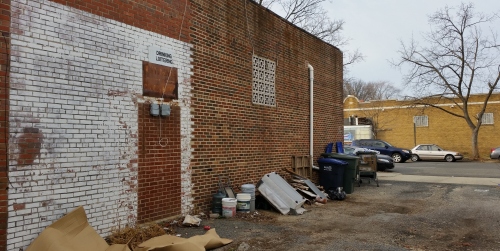 …and onto Independence on the other, and seems likely to encourage temporary parking while shopping. Pranksters have altered the “No Loitering” and “No Drinking” signs.

7 responses to “7-Eleven Gets an Earful from Unhappy Hill Easters on Proposed 15th Street, SE Location”