This past week saw the beginning of demolition to make way for new residential units on the Buchanan School site between D and E Streets, on 13th Street, SE.  It is one of the three residential projects being built in close proximity to Southeast Safeway.  The Watkins Alley Project, up before ANC6B is one of those projects, and lies on the south side of E Street, across from the Buchanan School project. 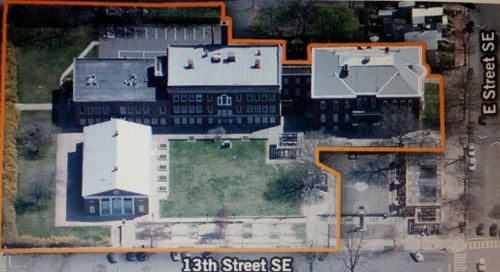 This was the layout of the Buchanan site before demolition began this week. The newer structure on the lower left has been demolished, as seen in the photo below. The non-historic auditorium to the left of the center building will be demolished. The two remaining historic buildings will be converted to condos. Subscribers to the newhilleast listserv can find a post on the history of the Buchanan site by Hill East resident/activist, Jim Myers, posted there on Sunday, titled: “Our Land of Broken Dreams”. That piece is reprinted below.

Previously printed on the newhilleast listserv and reproduced here:

Our Land of Broken Dreams

Piles of rubble along 13th Street, SE, behind old Buchanan School now seem to be all that remains of a pair of  quixotic ventures that came to naught in Hill East — and also sometimes made our neighborhood seem cursed by the shadow of too many ideas that were never meant to be in the first place.

Years ago, DC started getting rid of unwanted school buildings that were a result of racial segregation, requiring two schools where one would do thereafter. The Buchanan School was sold and for more than a decade became an enterprise that called itself the International Graduate University.  But it wasn’t a “university” in the common definitions, and that fact eventually left it empty without seeming purpose at all, while the land it sat on quietly but massively increased in value.

In recent days they’ve demolished section of Buchanan School closest to the 13th and D corner that briefly claimed to be the important-sounding Democracy Hall of Fame.  In the early days, the Hall enshrined the likes of Lech Walensa, who came all the way from Poland to our neighborhood to be so honored.

So Hall of Fame is now gone, and next to the piles, heavy machines on have also knocked down the remains of quixotic efforts by Lady Bird Johnson and her New York socialite/ philanthropist friend Brooke Astor who in 1968 wanted to turn the block along 13th Street into an “open-air living room” for our neighborhood.

It eventually included a sunken basketball court with seating for spectators, chess and checkers tables, concrete art and more — all of which evolved into sad uselessness in relatively short order. But, maybe, the neighborhood didn’t want an open-air living room; what many people here eventually seemed to want was a real living room in PG County.

Still the ill-fated “living room” venture was very ceremoniously dedicated in 1968 only days after rioting in the city ended, and on the day Lady Bird and Brooke came to Hill East, DC newspapers were still reporting about bodies being found in the rubble of burnt-out buildings elsewhere in the city.

After that, the sunken court eventually became a chosen spot to consummate  open-air drug deals (among other things) out of sight of the cops, and the discovery of new dead bodies on the basketball court sadly followed.

Then, for years, the rest of what remained of the open-air living room just sat there, rousing the question, “What was that supposed to be?”

Another of Lady Bird’s efforts in the 1300 block of South Carolina Avenue, SE, was removed years ago to build the row houses that were part of the Bryan School redevelopment project. A similar vision – dozens of townhouses and condos – now apparently awaits at Buchanan and environs.

12 responses to “Demolition Begins on the Buchanan School Site Near Southeast Safeway, Making Way for Residences”