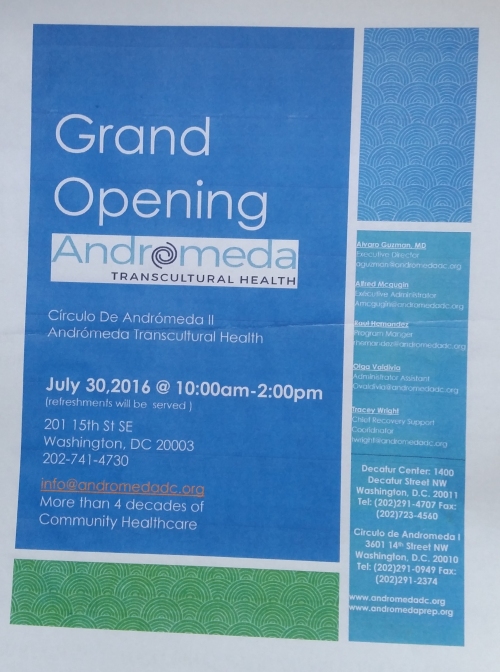 According to ANC6B Commissioner Chander Jayaraman, fliers were distributed yesterday announcing the grand opening of Andromeda substance abuse recovery and mental health clinic on July 30.  CAN Commissioners Jayaraman and Krepp met with the Director of the Department of Behavioral Health on Monday and Jayaraman requested that DBH withhold approval for Andromeda to begin operations until his appeal of the occupancy permit before the Bureau of Zoning Adjustment was decided.  (See CHC post here: http://bit.ly/2a6yIGR

Reacting to the announcement, Jayaraman said, “In my opinion, it is another example of how District agencies regularly ignore the concerns of the tax paying residents.  This is unacceptable.…’

CHC asked Krepp for comment, and she replied, “Yet again, DBH gives neighbors the middle finger instead of a helping hand.

DBH Director Royster told Commissioner Jayaraman and me on Monday to FOIA information regarding Andromeda’s services instead of willingly sharing it with those that live next to the new facility. Furthermore, she didn’t even have the decency to tell us on Monday that the facility will be opening next week.

The director’s continued gross incompetence makes me question why she was hired in the first place.”

Jayaraman said that it was his understanding the CM Charles Allen had not been informed on the imminent opening of the facility.  The commissioner said that he had – this morning – reiterated his and Krepp’s request that the Director use her authority provided under DCMR regulations to not permit Andromeda to begin operation until the BZA case has been heard.