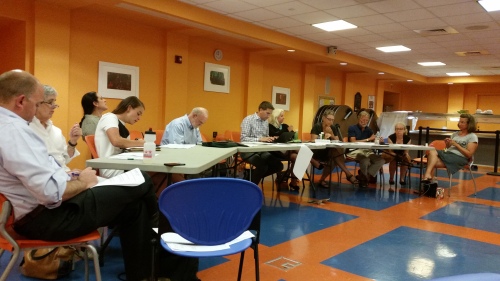 Commissioner Krepp:  “I’m not a rubber stamp…none of us up here are….”

ANC6B’s Planning and Zoning Committee raised its hackles Tuesday night when a Department of General Services (DGS) representative showed up with a design plan for the Watkins School addition – pre-approved by Historic Preservation Office (HPO) staff – with the expectation that the Committee would sign off on it.  Ordinarily, an applicant for a design undergoing a historic preservation review shows up early in the process with a preliminary design for ANC consideration and input.

The Committee’s response was predictable, given the on-going city-wide struggle by ANCs to assert themselves before often indifferent city agencies – particularly DGS, DCRA, DDOT and HPRB.  City agencies are required by law to give “great weight” to ANC opinion but more often than not, pay them lip service.

Commissioner Denise Krepp put it bluntly:  “I’m not a rubber stamp – none of us up here are – I will vote against this if I don’t get answers and I will make a stink if we don’t get answers.  Who dropped the ball?”  Committee Chair Nick Burger told the DGS representative that “something is clearly amiss” with the approval process for the Watkins project.  ANC Chair Kirsten Oldenburg said that DGS should have come before the ANC months ago – “there is no flexibility at this stage.”

Watkins School was built in the 1962, and hence not classified as a “contributing structure” to the Capitol Hill Historic District – that designation being limited to structures built before 1946.  Still, since the project is in the Capitol Hill Historic District, the HPO reviews the design of the project under its authority to review government projects.

DGS has razed the Southwest corner of Watkins as part of a modernization plan for the school to make room for a multipurpose wing including a cafeteria and multi-purpose room twice the size of the one being replaced, as well as a second floor library.  The school is currently closed with students temporarily being assigned to Eliot-Hine.  Watkins will reopen next August.

Burger admonished the DGS representative to carry the message back to the agency that the ANC and the community expect to be fully participating moving forward.   Burger then moved to recommend that the full ANC support the design, but stipulated the item not be placed on the consent calendar where it would be approved without further debate.  It was the clear intent of the Committee the full ANC expects to hear from a DGS official at its meeting on September 13, on why the ANC was left out of the process. The motion was agreed to unanimously.

During August, controversy concerning DGS erupted over what Will Sommer in a City Paper article termed a “classic poster child of local government dysfunction, the city’s Certified Business Enterprise program” – which gives local contractors an advantage in bidding on city contracts.  After a local contractor and major Bowser contributor failed to win two government contracts, City Administrator Rasheed Young stepped in, resulting in the resignation of the new head of DGS Admiral Chris Weaver, and the suspension of two employees who had failed to award the contract to the Mayor’s contributor.  Councilmember Mary Cheh has vowed to hold hearings to get to the bottom of what happened at DGS.