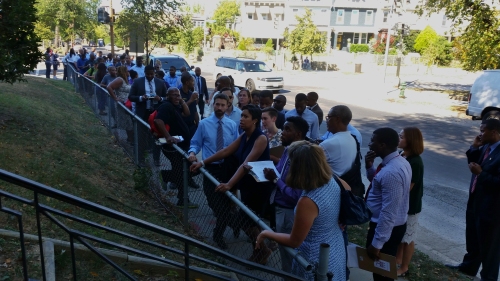 Bowser and CM Allen in front of the Boys and Girls Club, discussing the next step.

Hill East activist Francis Campbell (far left) gets some face time with Bowser to lobby for more affordable/senior housing at the Boys and Girls Club site.

Mayor Bowser took a 90 minute stroll through Hill East Tuesday afternoon, accompanied by CM Charles Allen, ANC6B Commissioners Denise Krepp, Chander Jayaraman, and Daniel Ridge, plus a slew of DC Agency representatives including DC Department of Energy and Environment chief, Tommy Wells. The walk was part of a series of Ward tours by the Mayor.

Bowser, coming face to face with the embarrassing Hill East Boys and Girls Club, asked, according to Allen, “Can’t we do something about this?”

Bowser decided what she could do is sit down with Allen and the Deputy Mayor for Planning and Economic Development (DMPED) and figure out the “next step forward” on redevelopment of the long abandoned Club at 17th and Massachusetts Avenue, SE.  Bowser stressed the need for community input, in particular, hearing what the neighbors don’t want at the site.

Allen later told CHC that he was “heartened” that the Mayor came into the community and saw firsthand some of the issues and challenges facing the community.  Asked how a new approach on the Boys and Girls Club might differ from the last failed attempt to redevelop the property – a plan which the Department of General Services (DGS) withdrew after considerable neighborhood opposition – Allen said that the last proposal was handled by the DGS whose job is not redevelopment of public property.    He suggested that DMPED was better able to consider the broadest range of possibilities as well and develop a more flexible Request for Proposals for development. For more on the failed development proposal for the B&G Club, see here:  http://bit.ly/2crh6Ty

Asked for reaction, ANC Commissioner Daniel Ridge, in whose ANC single member district the Club resides, said, “This is the culmination of recent concerted efforts between executive agencies, Councilmember Allen’s Office, neighbors, and ANC Commissioners. There is no question that we can find a way to transform B&G into a jewel on the Hill that brings jobs, meaningful amenities, and thoughtful programming to the neighborhood. A challenge is to get it done before an entire generation grows up with an abandoned shell.”

Long-time former ANC6B Commissioner and continuing Hill East activist Francis Campbell pressed the Mayor to consider redeveloping the site to provide affordable and senior housing, pointing to the lack of both in the neighborhood.  Campbell has been working for a decade for the redevelopment of the Club.  He gives credit to Bowser for “actually coming out and taking a look at the issues” that he has been working on for so many years –  “None of her predecessors did that.  Whether or not something might happen as the result….it would be nice to see, but I’m cautiously pessimistic that nothing will get done.”  Campbell says he is irritated that it took gentrification of Hill East to get the attention of the Mayor’s office – the issues of addressed on today’s tour – including the Boys and Girls Club – “didn’t become issues until the neighborhood started to change.”