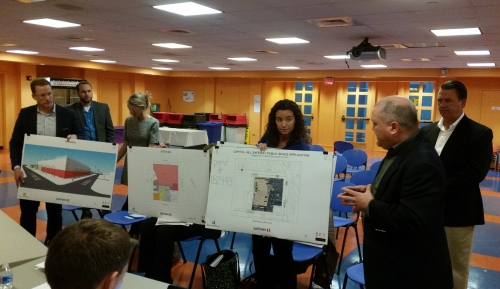 Developer Says SE Safeway To Be Closed for Two Years

Tuesday night, the Foulger-Pratt development team appeared before ANC6B’s Planning and Zoning Committee, chaired by Commissioner Nick Burger, to support their public space application for curb cuts in connection with the proposed development of the SE Safeway.

During the discussion, the following points emerged regarding the development:

The Committee voted 5 – 1 with 2 abstentions to recommend the full ANC6B approve the public space permit.  Opposition/abstention on the motion came from commissioners who had reservations about language included by Chair Burger to flag for the city the ANC’s concern about the appropriateness of the 67 foot tractor trailer trucks being used on residential streets.  Those with reservations about the truck size language felt that the issue should be addressed further along in the review process and/or were concerned that the language was a “back door way” to get at the long-standing issue of truck traffic routes on Capitol Hill.

The full ANC6B will take up the issue next Wednesday (instead of Election Day Tuesday), November 9, at Hill Center.