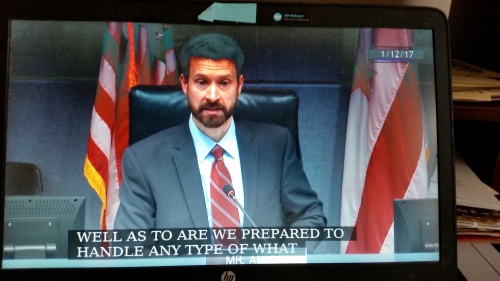 Ward Six Councilmember Charles Allen presided over a Thursday morning Roundtable on preparations for the Inaugural and the Women’s March on Washington.

Thursday morning, Chris Geldart, Director of DC’s Homeland Security Agency, told Councilmember Charles Allen that based on the 2009 and 2013 Inaugurals, the city is preparing for a turnout of 800,000 to 900,000 inaugural attendees.  Based on the number of reservations for bus parking at RFK, however, the numbers might not come close to those estimates.

Allen, in his capacity as chair of the city council’s Committee on the Judiciary, presided over a Round Table on preparations for next week’s inaugural.  He noted that “four years ago at this point there were 900 reservations for bus parking at RFK, and an additional 300 came in the last week, for a total of 1200.”

The city has issued a permit for 200,000 for the March on Washington, though Geldart told Allen he is planning for 450,000 to 500,000. Geldart told Allen that he had requested that the Woman’s March be officially designated as a National Security Event and included as part of the Inaugural planning but that the request had been denied by the Director of National Security.

Allen asked if the 3,000 law enforcement officers from outside jurisdictions and the 5,000 National Guardsmen who will help provide security and crowd control at the inaugural, will be available for the Woman’s March. Geldart said no, but that such large numbers of security personnel will not be necessary because there will be no need for the huge security perimeter.  Allen admitted to being “a little anxious” because the “data points indicate a very big turnout on the 21st” and he is concerned about counter protesters. Geldart assured Allen that he was committed to protecting organizations exercising their First Amendment Rights.

The Women’s March will begin with a rally at 3rd and Independence from 10:00am until noon in front of a stage which organizers will erect near the Native American Museum.  At 1:00pm, attendees will march west on Independence, to 14th Street, turn right to Constitution Avenue, then left on Constitution to the Ellipse where the marchers will disband.