Larry W. Clark, VP at Donatelli, said the developer hopes to break ground on the Res 13 Development in this year’s third quarter 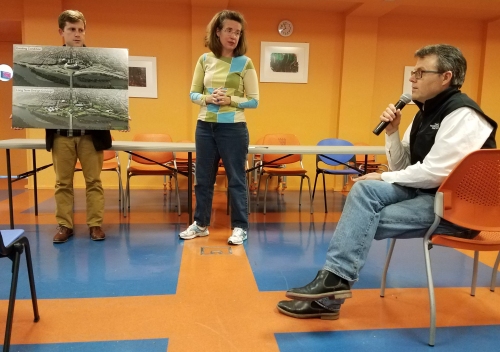 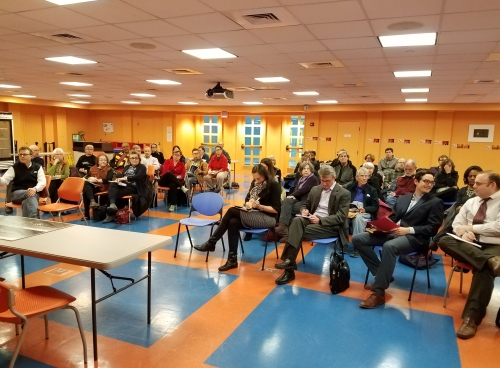 Some 40 Capitol Hill residents turned out for the community briefing

Last night, Donatelli Vice President Larry W. Clark said that the developer hopes to begin construction on Donatelli/Blue Skye’s mixed use development on Reservation 13 in the third quarter of 2017.  Clark presented a development timeline at a Hill East community meeting organized by ANC6B Commissioner Denise Krepp to update the community on plans for Reservation 13 and the RFK Stadium.

Last December, Donatelli/Blue Sky asked and received from the city council, a one year extension of their building permit application, while DC Department of Transportation reviews the project’s infrastructure plan.  Clark estimates DOT will sign off in June, allowing the permitting process to go forward and construction to begin in the third quarter.

The project envisions 353 residential rental units, 30% of which will be affordable, and 20,000 plus square feet of retail.  The latter would allow for up to ten ground level retail spaces in two buildings, with the possibility of expansion into some 8,000 square feet below grade for a retailer with additional space needs. The rental units – both market and affordable – will range from studio to three bedroom units.

In answer to a question, Clark said the developer had looked at LITHC financing for the affordable housing portion, but that the agency has a lot of regulations, and financing through other agencies could be easier.

Asked for his reaction, ANC6B Commissioner Daniel Ridge told CHC, “My takeaway is that Donatelli/Blue Sky’s financing seemed less than certain, a sense I got from their answer to the LIHTC question and from what we heard recently about the postponed M Street development. If that project is soft, it could stall the site for another 10 years.”  Last week, CHC posted on the difficulty Cohen Seigel Investors are having in finding financing for their proposed 673 unit project at 1333 M Street, SE, see here:   http://bit.ly/2kTQKxy

Much of last night’s meeting was devoted to community reaction to EventsDC’s infrastructure plan for the RFK Stadium site.  What riled the community was part of the transportation plan to facilitate access to the new complex.  The preliminary plan calls for for a road connecting Benning Road to Barney Circle, which Commissioners and residents fear will funnel Maryland commuter traffic through their neighborhoods.  Krepp declared a preemptive “No” to the proposal, and promised residents future meetings with Events DC on the matter.

Krepp told CHC, “I’m very concerned about EventsDC’s transportation plan. They made it very clear that the design is for commuters not residents.  It moves cars, not people. ”

Ridge said, “Residents should accept an EventsDC role in the future of the Hill East Waterfront as neither natural, nor automatic, nor inevitable.  What I heard from EventsDC about a road from Benning to Barney Circle was preposterous. So preposterous and so poorly defended that it nearly overshadowed the question of why we were talking to EventsDC about it at all.”