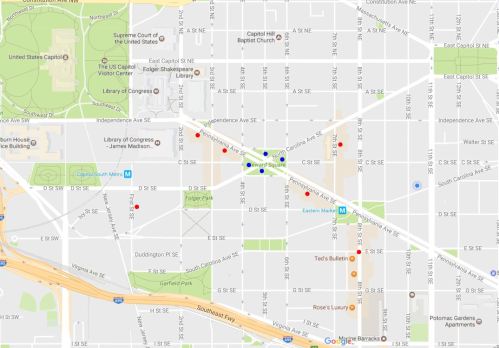 ANC6B is waging war on rats in response to expressions of alarm and concern by Capitol Hill residents who live near “restaurant clusters” which provide support for the city’s rodent population.

On Tuesday, March 21, the ANC’s Taskforce on Outreach and Constituent Services co-chaired by ANC6B Commissioners Jennifer Samolyk and Diane Hoskins, held a standing room only community meeting attended by more than 50 residents who took the opportunity to voice their concerns about rats.  The six “restaurant clusters” identified by residents and by Department of Health Rodent Control Chief Gerard Brown include:

CHC interviewed a number of attendees as to their impression of the meeting and what their take-away had been.  The overwhelming sense of residents is that rats – which have been under control for a while – are back in a horrendous way.  People were incensed and related personal experiences.

A resident of C Street, SE, behind the Tune Inn and the Hawk & Dove said she knocks on the inside of her door before leaving home to scare away rats outside; a resident of 8th Street, SE, walking home after dark, saw 8 rats in one block under the covered walkway on 8th Street next to the Hine project.  A resident of the 600 block of C Street S.E. said defecation in the green spaces flanking Pennsylvania Avenue as well as food leftovers attract rats to the park.  Residents singled out the 7/11 on Barracks Row and Ophelia’s Fish House – both at 8th and C Streets – as examples of egregious trash management offenders, with rats so emboldened or overcrowded that they can be seen on trash bins in the daytime.  The nearby residents showed a video posted to YouTube of the trash conditions at these venues:  See here:  http://bit.ly/2mXnoTf

The rat problem is directly related to a neighborhood’s number of food service establishments with poor trash management policies.  The city has encouraged development of dining destinations, and has lax enforcement of trash and rodent management either deliberately to reduce the hassle factor of operating a restaurant or because they have turned a blind eye to the consequences of the problems associated with development.  Consequently, the residents have been left to fend for themselves.  ANC6B, chaired by Chander Jayaraman, has pioneered the use of liquor license applications and renewals to require restaurants to use best operating practices regarding trash management.  Recently, the ANC won a precedent-setting finding by DC’s Alcohol Beverage Board that trash management can be considered by the ANC in making recommendations on liquor licenses.

Some restaurants, notably, &Pizza, Eat Bar, and Acqua al 2 have earned praise from the ANC and/or residents for adopting exemplary trash management practices.  Others, such as Capitol Hill Tandoor, are in the process of adopting these practices.  Some, such as the three Spike Mendelsohn restaurants on the 300 block of Pennsylvania Avenue, have resisted addressing trash and rodent issues.

The Mayor and the City Council have not made rodent control a priority and do not provide the funds or the resources to effectively manage rodents.  The Department of Health has four inspectors for the entire city and 9 abatement employees.

The city does a poor job of enforcing the current regulations.  The Department of Health’s Bureau of Rodent Control (apparently) somehow lost the ability to fine businesses and residences for harborage of rats – read “rat burrows”.  (Ed. Note:  How this happened is unclear, since the law still seems to be in effect.  If – granted it’s a big if – this ability was lost by administrative action, the power to fine should be restored.  See here:  Subchapter I. Bureau of Rodent Control. Rodent harborage prohibited http://bit.ly/2nsLjGf)

Rats are rampant at construction sites.  Developers say city regulations prohibit use of “tracking powder” – a rodenticide “shot” into rat burrows on construction sites – because of hazards to workers.  Baited traps which are permitted are ineffective means of control.

Use by DOH of an effective means of rat control – treating burrows with dry ice, which suffocates rodents in their burrows – was recently suspended because of federal regulations.   EPA prohibits the use of dry ice for rat abatement since it’s not labeled as a rodenticide.  It may be that the agency was prompted to issue its stop use order by protests from National Pest Management Association (and it seems likely the Association will lobby hard to prevent any change in that regulation).  See here   http://usat.ly/2np01xi

Rats are rampant on green space public lands on Pennsylvania Avenue, but confusion among residents and agencies regarding who has jurisdiction to do what often results in nothing being done.

Among the action items to come out of the meeting:

A letter to DOH and city officials advocating a citizens’ enforcement pilot program and activating of the DOH Rodent Control Task Force for hot spots.  (See Part I of CHC’s three part series on rats here:  http://bit.ly/2njUUit)  In addition, DOH will consider additional installation of rat proof trash containers similar to those recently installed on the 600 block of Pennsylvania Avenue.

Residents are organizing to appear at the city council budget hearings to ask the council to put more resources into rat abatement.

Residents are organizing to reach out to and collaborate with other ANCs and to press the city council for regulations requiring indoor trash storage for businesses serving food.

As reported by CHC, CM Charles Allen has already pledged to “take a crack” at organizing a coalition of government agencies and civic and business organizations to take on the rodent problem.