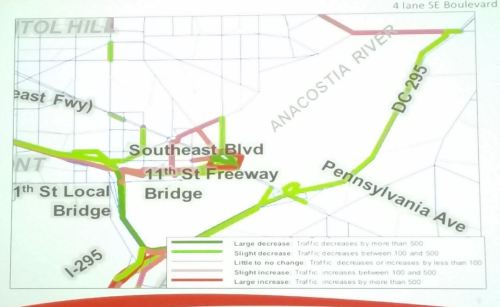 Wednesday night, DDOT planner Jonathan D. Rogers told ANC6B’s Transportation Committee, that DDOT has embarked on the required Environmental Assessment (EA) for the proposed Southeast Boulevard.  The project is a joint effort of DDOT and the Federal Highway Administration (FHA).  The EA will consider the impact of the project on air and water quality and historic preservation, and produce a concept design based upon community’s preferred alternative.

The contract for the assessment has been let and the process will take some 18 months.  Rogers said, “The key will be community engagement” – in addition to the nearby neighbors, some of the community organization stakeholders include ANC6B, ANC7B, the Capitol Riverfront BID, and the Capitol Hill Restoration Society.

DDOT is still coming up with a schedule, but Rogers envisions two public meetings and a final public hearing – required every time federal funds or lands are used for a development project.  The first public meeting will likely occur this summer or fall.  The result of the EA will be a final report which DDOT hopes will conclude with a “FONSI” – a finding of no significance regarding environmental impact.  The report will also include a concept design for the preferred alternative.  The EA then goes to FHA for consideration, and can’t move forward without a favorable response.  Rogers said that will be followed by the funding piece – which he termed “a heavy lift.”

The cost of the project is estimated at $120 – $190 million – more than the annual budget of DDOT. ( See CHC post here:   http://bit.ly/2o26hN6 )  Sources for funds include DDOT, the federal government, and local funds.   Given the cost, Rogers pointed to the need to find a way to monetize the project – i.e., repurposing public lands in the 200-to-250 foot right of way not used for the boulevard itself.    Rogers said that the EA will “gauge the temperature of the ANC regarding land use,” since concept design necessarily takes future land disposition into consideration.

He said land use issues are potentially controversial, citing the possible declaring of the associated public lands excess and opening them up for development or a bus storage, parking, and maintenance facility.  Public lands will be disposed of in a process separate from the EA process.

Some ANC commissioners were more than skeptical that a bus terminal would be in the best interests of the nearby neighbors.  Rogers said that any such use would depend on the ability to design an entrance and exit for such a facility which “is not at the neighborhood level.”  He noted the city’s severe need for bus storage and maintenance saying more buses are coming to the area and the needs are greater than the city thought.   In any event, the EA will not design the future project beyond the conceptual.