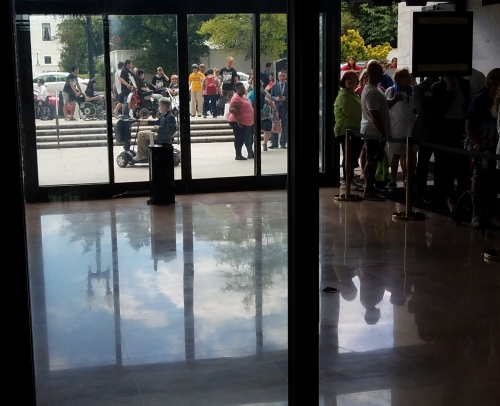 Circa 1:50pm, Tuesday, July 25. ADAPT activists queue up for admittance to the Hart Building at the Constitution Avenue entrance.

U.S. Capitol Police negotiate with organizers the processing and treatment of protesters who choose to be arrested.

The loosely organized protest in support of preserving Medicaid and independent living comprised individuals representing the American Association of People with Disabilities and representatives from the National Conference on Independent Living. More than 200 people were involved.  The protest took place in the Hart Senate Office Building atrium at the base of Alexander Calder’s iconic sculpture, Mountains and Clouds.  Click to enlarge.

Once leaders announced that the vote on the motion to proceed to the GOP health care bill was underway, protesters started chanting – “Don’t Touch Medicaid.”  At center is demonstration organizer Bruce Darling, President and CEO of the Center for Disability Rights Inc., to his left, Dr. Gregg Beratan, Policy Analyst for the CDR. 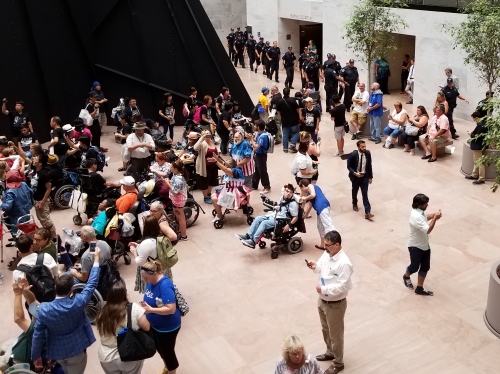 After the chants started the police warned that the demonstration was illegal and and protesters who remained were subject to arrest, the police moved in. Those who did not want to be arrested moved outside the police lines.

Dozens, chanting “I’d rather go to jail than die without Medicaid” were arrested. 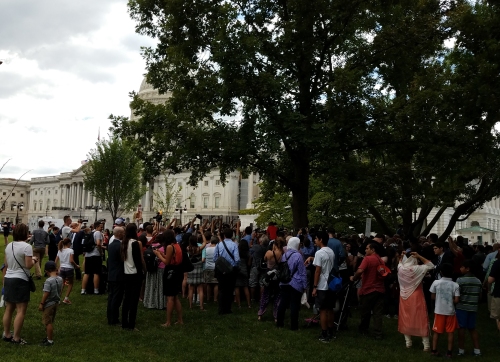 As protesters were being arrested in the Hart Building, Democratic Senators held a press conference on the grass across from the Senate steps. Senator Sanders could not be seen, but his voice rose above the throng, “are we going back to the days when healthcare was for the healthy and wealthy? We’re not going back. We’re standing with you.”

A closer view shows Sanders at left center of the photo, with Jeff Merkley of Oregon by his side.

After the press conference, and circa 3:45pm just after the Vice President’s motorcade had departed the East Front, Senators moved the rally to the Senate steps.