Community Organization Forms to “Adopt an Urn” at Lincoln Park 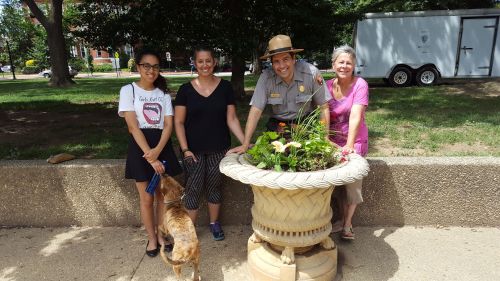 Community Organization Forms to “Adopt an Urn” at Lincoln Park

Karen Cohen, Master Gardener and frequenter of Lincoln Park says she wondered “What are these things? “ – referring to the 15 large decorative urns ringing the inner oval of Lincoln Park.  That question lead to the formation of a community group of 17 volunteers – “PLANTS” (People Leading Active Lives Near their Site) to participate in a DIY project to plant and maintain the urns – “Adopt an Urn”.

Cohen contacted National Park Service (NPS) Ranger Vince Vaise and worked out an annually renewable  contract under which the volunteers in the group are responsible to care for the urns at their own expense, are subject to a Volunteer Services Agreement, and guarantee that the work will be supervised.

The NPS emptied the urns of compacted earth and replaced it with potting soil.  Cohen appealed to Frager’s Garden Shop to donate additional potting soil and flowers.  There’s no water in the park so volunteers have to trek to the park with jugs.

The park was part of Pierre L’enfant’s original 1791 plan for the District.  In 1867, Congress named the park Lincoln Square – the first site to bear Lincoln’s name.  The statue was dedicated April 14, 1876, with Frederick Douglas delivering the keynote address.

The monument to Mary McLeod Bethune to the east was dedicated July 10, 1974.  It was the first monument to honor an African American woman in a public park in the District of Columbia.