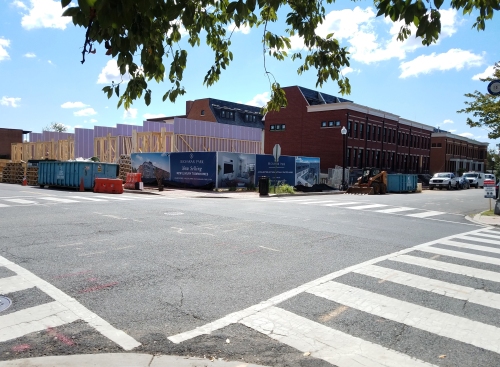 Here’s a look from Saturday at progress at Buchanan Park, on the west side of SE Safeway. Construction has started on the D Street townhomes on the north side of the project. There will be 41 single level condos in the old Buchanan School Building, and 32 – 3 and 4 bedroom new townhomes and condos on 13th Street and D Street.

Presentations:  Events DC presentation on updating the ANC regarding the development of RFK Stadium site.

Letter to DDOT re: WGL’s work on Browns Court, SE, in the Capitol Hill Historic District.

Letter to DDOT in support of the Pennsylvania Ave. Streetlight Upgrade Project.

Report out on follow up action from ANC 6B’s Special Call Meeting on the continued closure of 7th Street, SE.

Nomad Hookah Bar – Suggested Motion:  The ANC protest the request by Nomad Hookah Bar (1200 H Street, NE) for expanded sidewalk cafe hours unless the ABL Committee determines at its September 2017 meeting that a protest is not needed.  The reasons for protest may include non-compliance with existing Settlement Agreement, and impact to peace, order, and quiet.

321 Twelfth (12th) Street, NE – Recommendation: ANC6A send a letter of support to BZA for a special exception from the lot occupancy requirements to construct a two-story rear addition at on condition that best efforts be made to get letters from support from the tenants at 1203 D Street NE, 1201 D Street, NE, and providing there is no light or air impact on the house behind the property at 321 Twelfth (12th) Street, NE.