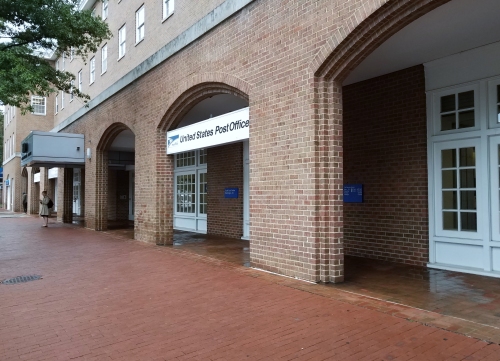 At night the space becomes a sleeping area for the homeless.

Last night, ANC6B endorsed the Historic Preservation concept for the extension of storefronts of the Bernstein Building (Citibank) at 600 Pennsylvania Avenue, S.E.  The extension will come at the expense of a number of homeless who sleep under the arcade that will be filled in to extend the store fronts to the sidewalk.

During last week’s presentation before the ANC’s Planning and Zoning Committee, Porter Page, Senior Vice President of Commercial Property Management for Bernstein Management said that the project was proposed “to address the homeless issue.”  She cited the number of homeless people sleeping  under the arcade which makes rental of two of the several vacant offices difficult.  The US Postal Service occupies one of the commercial spaces and will be enlarged by the construction.   Commissioner Dan Ridge pointed out that the project was not “addressing the homeless issue, but moving it.”

Page said the company had tried using video cameras to monitor the space but “the problem is way bigger that that”.

Rui A. Ponte, with the Penney Design Group, said that the timeline envisioned is to have everything in place to begin a phased construction in January, with work being complete on one half of the arcade before beginning work on the other half.

The Committee recommended that the full ANC support the historic preservation design concept by a vote of 7 – 1.   The full ANC voted to support the project without objection Tuesday night.

There are several reasons for homelessness, and many have mental illness or substance abuse at its root.  A Washington Post article by Peter Jamison from May 10, 2017, numbered the city’s homeless at 7,473.  The article reported that Kate Coventry, a senior policy analyst at the DC Fiscal Policy Institute, said that the problem driving many families into homelessness is a lack of affordable housing.  See here:  http://wapo.st/2f7fh3N