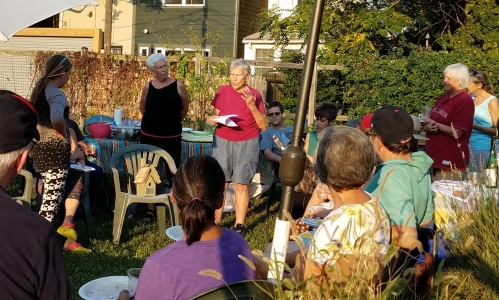 Sunday evening, some 30 gardeners who work the plots in Kings Court Community Garden gathered to celebrate the 20th anniversary of the garden’s founding.

The Garden was founded in 1997 after a developer purchased the Kings Court alley lots only to find later that they could not be developed. A period of uncertainty ensured during which the developer attempted to donate the land to the community.  While the process was in limbo, community gardeners seized the initiative and began construction of what was to become Kings Court Community Garden.  The first year was spent fencing and preparing the land; the first serious gardening efforts began in 1998, with ten gardeners.  Nearby resident Pat Taylor was one of them.

No questions were raised until 2001, when the garden’s future came under threat in the form of unpaid taxes on the land.  Taylor received a notice from the city that $2200 in back taxes were owed on the land and unless paid, the lot would be offered for sale for back taxes.  She rallied fellow gardeners who donated money to pay the back tax bill.  This led to the property’s owner gifting the land to the gardeners but only under the condition that the new owner be a 501©(3) nonprofit corporation.

By 2003, the legal work was completed and Kings Court Community Garden – now a formal 501(c)(3) – held a deed to its 1/5 acre lot and became the first DC community garden to own its own land. Councilmembers Sharon Ambrose and Jack Evans got legislation passed granting the Garden tax exempt status.

This was the first of three initiatives by the non-profit – the Capitol Hill Community Garden Land Trust – to help Hill East residents start new community gardens. Next was the one-half acre Green Seed Community Garden, followed by the Green Field Community Garden – the last still in the process of acquiring its own land.  Both of these – like Kings Court – are located in the middle of their blocks.

Kings Court currently has about 50 gardeners.  Pat Taylor and other long-time gardeners took the occasion to commemorate King Court Community Garden’s founding gardener Maribeth Iler who was for many years the longest-serving member of Kings Court Garden.  Iler died in 2010. Gardeners honored her memory with a brass plaque attached to a birdhouse which will be installed in the garden.