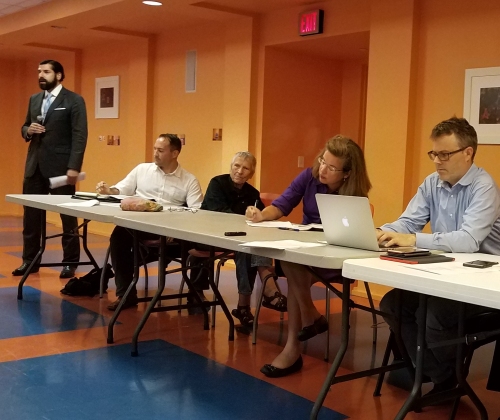 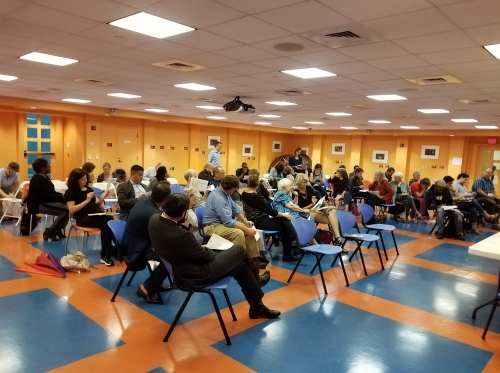 Sarosh Olpadwala, Director of Real Estate, Office of the Deputy Mayor for Economic Development (DMPED) told some 40 Hill East residents last night, “I can state unequivocally that we will close (on the (Donatelli-Blue Sky Reservation 13 Project) by the end of the year and that we will break ground in the first quarter of 2018.”

The announcement came at a meeting of the ANC 6B Hill East Task Force, chaired by Commissioner Dan Ridge.  The meeting was held in response to a request from Commissioner Denise Krepp, who has been prodding the city to commit to breaking ground before a year-end deadline.  Krepp said during opening remarks, “We’re going to walk out of here tonight with the knowledge of when the dirt goes”.

In September of 2013, DMPED awarded the proposal to develop two city-owned Reservation 13 parcels to the Donatelli-Blue Sky Construction team.  The proposal is for a mixed use project, built as a matter of right (no Planned Unit Development (PUD) process required), and envisions 353 residential rental units, 30% of which will be affordable, and 20,000 plus square feet of retail.  The latter would allow for up to ten ground level retail spaces in two buildings, with the possibility of expansion into some 8,000 square feet below grade for a retailer with additional space needs. The rental units – both market and affordable – will range from studio to three bedroom units.  The deadline for the city’s commitment to the project, having been extended once, expires at the end of 2017 without another extension.

Olpadwala said that delays in the permitting process had been the result of necessary input from multiple city agencies regarding the creation of new infrastructure – streets and utilities – for the project.  That was backed up by developer Chris Donatelli. He noted that other projects have been infill projects – “this is more complicated because there is no infrastructure. But it’s real – it’s happening. We have spent too much money for it not to happen.”

In response to a question from Krepp about when the next piece of Reservation 13 would be developed, Olpadwala said “We don’t have a certain date. It will depend on what happens on the campus and with infrastructure. Developing Reservation 13 is a major portfolio for us.  Once we get the first phase moving we want to move on the next parcel.”

Asked for reaction to last night’s meeting, Ridge said that one of his main concerns continues to be the possibility that financing for the project seems less than certain.  He had expressed similar concerns at a February 2017 meeting on the development.  See here:  http://bit.ly/2lbZIWQ “Nothing has changed,” he said, adding that “uncertainty regarding construction of a new jail on Reservation 13 could be a reason for the financing remaining soft.”

Ridge offered a resolution seeking to clarify what the prerequisites for going to closing are, and urging the full ANC to send letters to DMPED, DDOT, and DCRA urging them to complete the permitting process with all due speed.  The motion passed 5 – 0, and the full ANC6B will consider it at their November meeting.